Ministry says no decision yet on whether to send S. Korean troops to Hormuz Strait

South Korea has made no decision yet on whether to send its troops to help safeguard the strategically vital Strait of Hormuz, Seoul's foreign ministry said Tuesday, amid rising tensions in the Middle East from the US killing of a top Iranian general last week.

Friday's fatal drone strike on Qassem Soleimani, the head of Iran's elite Quds Force, has raised expectations that Washington will step up calls for its allies to contribute to maritime security operations in the waterway that hosts key shipping lanes for more than 70 percent of South Korea's oil imports.

"We are carrying out an interagency review in consideration of the need to protect South Korean ships and nationals that pass through the strait, and the ongoing international security efforts there," Kim In-chul, the ministry spokesperson, told a regular press briefing.

"No decision has been made yet. ... We will continue to contribute to international efforts for stability in that region," he added. 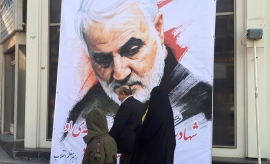 Friday's fatal drone strike on Qassem Soleimani, the head of Iran's elite Quds Force, has raised the tensions in the Middle East. (Yonhap)

South Korea has reportedly been weighing the option of using its anti-piracy Cheonghae unit operating off the Somali coast to partake in a US-led campaign to safeguard the Strait of Hormuz.

But it has been walking a tightrope as it seeks to balance increased security contributions as an ally of the US with exploring ways to maintain its long-standing trade relations with the Islamic republic.

Seoul's foreign ministry has launched an internal team to handle the upsurge in tensions in the Middle East. It has also been leading an interagency working-level meeting to discuss measures to handle the possible fallout from the tensions, such as oil price fluctuations.

Later on Tuesday, the ministry held a meeting with South Korean companies with operations in Iraq and called for stepped-up efforts to ensure the safety of those stationed there.

Deputy Foreign Minister for Overseas Koreans and Consular Affairs Lee Sang-jin, who presided over the meeting, explained government measures to protect its citizens and stressed the importance of close communication between the government and the companies, according to the ministry.

The Seoul government has imposed a travel ban on Iraq, but has given exceptional permits for those involved in business, government and media.

The majority of the roughly 1,570 South Koreans currently in Iraq are employees of major construction firms that have clinched projects in the country. (Yonhap)