How X1's promising career came to an abrupt end

From its record-breaking debut last summer to its sudden disbandment Monday night, X1’s story was short but extraordinary

"We negotiated with the agencies representing each member of X1 on terms of unanimous agreement but failed to reach an agreement and decided to disband (the group),” the agencies said in a joint statement after the talks fell through.

The decision came months after the vote-rigging scandal surrounding the “Produce” series forced the musicians from X1 and Iz*One to put their careers on hold, leaving their future up in the air. 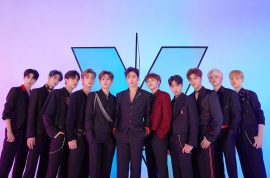 Soon after the announcement, CJ ENM, the company behind the cable channel Mnet, said though it had tried to help X1 resume its activities, it respects the agencies’ decision.

The company also said the possibility of Iz*One, another group formed out of the “Produce” series, resuming its activities was being “considered positively.”

Short but impactful, X1’s story is one to remember.

In late August last year, the group debuted with 11 members who had competed earlier that year on Mnet’s reality competition show “Produce X 101.”

Its debut album, “Emergency: Quantum Leap,” sold 524,007 copies in its first week, according to Hanteo Chart, setting a record for the most first-week sales for a debut album in Korea.

The video for the single “Flash,” which ended up being the group’s one and only music video, went on to rack up over 64 million views. X1 was also the first act to appear on Billboard’s Social 50 charts prior to its debut, charting at No. 6.

On the surface, everything seemed to be going well for the act. But in retrospect, it was the perfect calm before the storm as one of the biggest scandals in the K-pop world was brewing underneath.

Since 2016, when Mnet’s flagship audition series “Produce” aired for the first time, it has faced criticism centering on fairness and transparency.

But it was during the fourth season, in 2019, that the show was truly taken to task when angry viewers detected a pattern in the vote margins separating the top 20 contestants. People began speculating.

Then a police investigation was launched and eventually Ahn Joon-young, a director of the “Produce” series, and the program’s chief producer, Kim Yong-beom, were indicted on charges of business obstruction and fraud.

Within less than six months, X1, the group with the biggest charting debut in Korea and a contract spanning five years, met its demise -- all because of a scandal surrounding the very show that gave birth to it.

Following the disbandment news, former X1 member Nam Do-hyon, who is also part of another group called MBK Boys, took to Instagram to share his feelings.

"I want to say sorry to those who were shocked by the news. I’m happy to have learned so much and received so much love. I will never forget the precious memories from being part of X1.”

In a video, former X1 member Lee Han-gyul said sorry to fans and added that he had learned a lot while on the show.