[Herald Interview] Canadian envoy on Korea in the ’90s, the maturing of bilateral ties and future partnerships in AI

Canadian Ambassador Michael Danagher first came to South Korea in 1992 and began nearly three decades, on and off, of interaction with “fun and loving” South Koreans.

“For me it (the ambassadorial appointment) meant coming back to a place I was familiar with. I hoped I would have the best insight and the best ability to impact on our bilateral relationship,” Danagher, who is fluent in Korean, told The Korea Herald in a beautifully lit outdoor ice rink at the Grand Hyatt Seoul.

The interview took place on a Thursday night in December at the hotel, where the Canadian Chamber of Commerce hosted a year-end event.

Looking over at the skaters enjoying the romantic Christmas vibe, the ambassador said a fondness for skating was one of the commonalities between Canada and South Korea, as well as the four seasons.

Danagher joined Canada’s Foreign Ministry in 1987 from the private sector and served in Lagos, Hanoi and Budapest before moving here to succeed Eric Walsh as ambassador.

Through those years, he witnessed some of the major moments in this Asian country’s path toward economic and social progress.

He described South Korea in the 1990s as “a young democracy” and “a society finding itself changing.”

“The very first time my wife and I came to Korea was 1992. Then we moved here in 1993. Korea was of course already very well developed economically, but was a very young democracy. I think my experience at that time was seen through the eyes of a society finding itself changing.”

Of all the events he has seen during his time in South Korea, he said, the most important was the restoration of democracy. 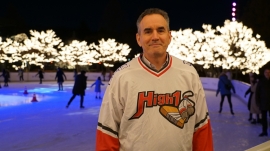 Canadian Ambassador to South Korea Michael Danagher poses during an interview with The Korea Herald at an ice rink at the Grand Hyatt Seoul in central Seoul, Dec. 12. (Kim So-mee/ The Korea Herald)

“Everything else has come out of that, (including) prosperity and in many ways the entertainment industry and how that has been able to flourish. So it’s been wonderful to see democracy (play a role).”

Over the years, relations between Canada and South Korea have also seen changes. As the envoy put it, they have matured.

The history between the two dates back to the 1950-1953 Korean War, when Canada deployed some 26,000 soldiers, the third-largest number from any of South Korea’s allies. Official diplomatic relations were established in 1963 and elevated to a strategic partnership in 2014.

“I’d say the breadth of issues we are in discussion with regard to Korea is much broader that it was in the 1990s.”

Previously, bilateral dialogue was primarily about trade and defense, centering on Canada’s participation in the UN Command. There was not very much going on in terms of public diplomacy.

“Things have matured here in terms of how we move,” the envoy said.

Trade is still important for both countries, which forged a free trade agreement in 2015, Danagher said.

“Korea has become a much more diversified economy,” he said.

Danagher said Canada was “very happy” with the FTA.

“From our perspective, I’ve been very happy with it. Canada and Korea have two complementary economies. We’ve seen growth in areas we’ve expected, and we think the same thing for Korea,” he said.

Looking ahead, the envoy sees opportunities for stronger ties in the private and public sectors in areas such as artificial intelligence, where both countries are leaders.

“I think countries like Canada and Korea, and maybe there are other countries globally, we have to think of a way of developing our own chains and connecting them to like-minded countries so that we don’t find our AI becoming politicized and a weapon of trade policy,” he said.

Two of South Korea’s tech giants, Samsung and LG, have invested in Canada’s AI research labs, while Canadian companies are working with South Korean firms to develop AI-incorporated technology in a wide range of systems.

Some 20 percent of Canadian SMEs are actively exporting to South Korea, and to increase that number his team recently visited companies in Canada to discuss opportunities in South Korea in areas such as agro-foods, technology, clean tech and transportation equipment.

“It’s interesting because we used to tell companies coming into the Korean market that it is a difficult market for SMEs. ... Canadian exporters have changed a lot, they are more prepared to come into nontraditional markets, and the FTA has helped a lot,” he said.

On the issue of the unfinished war on the Korean Peninsula, Danagher said the matter has to be resolved through a diplomatic process with the aim of denuclearization. North Korea, defying international pressure, has been developing nuclear weapons, making the peninsula one of the tensest regions of the post-Cold War world.

“We’re still in a non-resolved issue. ... I think the intention is to welcome North Korea into the family of nations and they can understand that their destiny has to be part of that. But it has been very clear what the tradeoff has to be for that.”

He did not forget to mention the sacrifice of Canadian soldiers during the Korean War.

“I think from a Canadian point of view we look at the sacrifice of our Canadian soldiers and those of Korean and other ally countries as one of the pivotal events of the 20th century. ... In some ways those Canadian soldiers and allied countries are part of history as those that happened in the Joseon era and the Goryeo era, they made their positive contribution,” Danagher said.

Ahead of the 2018 PyeongChang Winter Olympics, the Canadian Embassy invited Canadian veterans who fought in the Korean War here and reenacted the 1953 “Imjin Classic” ice hockey match, which was played by Canadian soldiers during the war on the frozen Imjin River, now in North Korea’s territory.