From jumping bail and fleeing to Lebanon to be met with an arrest notice from Interpol, Carlos Ghosn's escape from Japan has been worthy of a Hollywood plot.

Here's what we know about the former Renault-Nissan boss's flight:

The exact circumstances of his departure from Japan, where he was under house arrest pending trial, are still shrouded in mystery.

On Thursday, Kyodo News quoted an associate of Ghosn, Imad Ajami, as claiming the tycoon was helped by two private security operatives who pretended to be part of a music band for a Christmas party.

But speaking to AFP on Friday, Ajami said this scenario was "speculation."

"I don't know how he left" Japan, Ajami said in a telephone interview, adding that he had had no direct contact with Ghosn since he left Japan.

A surveillance camera at Ghosn's Tokyo residence showed him leaving alone around noon on December 29 and not returning after, according to public broadcaster NHK.

Police think there is a possibility he joined someone to head for the airport as no suspicious person was seen around the time that Ghosn left, NHK said.

Ghosn is believed to have taken a private jet from Osaka's Kansai Airport in western Japan on December 29 to Istanbul.

It is thought he then flew from there to Beirut.

It is not clear how he got past Japanese customs.

The Wall Street Journal reported that he was sneaked onto the flight from Osaka in a large case for audio equipment, which was later found at the back of the cabin.

The newspaper cited unnamed sources close to the investigation in Turkey that holes had been drilled into the bottom of the case to ensure the businessman could breathe. 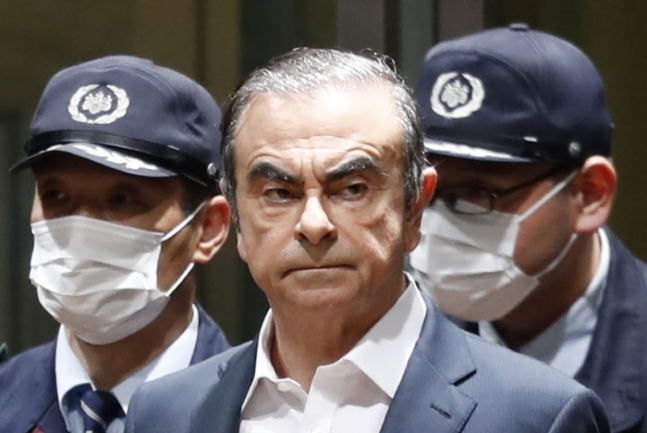 Turkey's interior ministry has opened an investigation into Ghosn's apparent transfer between private jets at an Istanbul airport on Monday.

The investigation is focused on two flights.

The first, a Bombardier labelled TC-TSR, flew from Osaka in Japan, landed in Istanbul at 5:15 am and parked in a hangar.

The second was a private jet to Beirut, a Bombardier Challenger 300 TC-RZA, which left 45 minutes later, according to DHA.

Ghosn said in a statement on Thursday that he acted alone without his family's help.

The Wall Street Journal reported that he was assisted by a former US special forces operative, Michael Taylor, now working as a private security contractor, who it described as an "expert in the art of clandestine getaways."

According to the Journal, the Turkish investigation showed that Taylor and another man had travelled from Dubai to Osaka aboard a private jet on Saturday, a day before Ghosn made his escape, and that the pair were travelling with two large black cases.

There is no emigration data showing Ghosn's departure from Japan but he entered Lebanon on a French passport, according to airport documents seen by AFP.

Lebanon said the former car mogul -- who holds Lebanese, French and Brazilian nationalities -- had entered the country "legally" at dawn on Monday.

His three passports were held by his Japanese lawyers, to limit the risk of flight.

A source close to the matter told AFP, however, that the Tokyo court had nonetheless allowed Ghosn to keep a second French passport so long as it was kept "in a locked case" with the key held by his lawyers.

for Ghosn's arrest in the wake of him fleeing Japan.

However, a Lebanese judicial source told AFP that Beirut and Tokyo do not have an extradition agreement under which Ghosn could be sent back to Japan.

Ghosn stands accused in Japan of deferring part of his salary until after his retirement and concealing this from shareholders, as well as syphoning off millions in Nissan cash for his own purposes.

His home in France was searched in June as part of a probe into his sumptuous marriage celebrations at the Palace of Versailles in 2016.

Three lawyers in Lebanon submitted a report to the public prosecutor on Thursday demanding that the businessman be prosecuted for a trip he made to Israel in 2008.

Details of just how he escaped could be clarified on Monday when the former auto executive is to speak to the press in Beirut. (AFP)