[Graphic News] Trump, Obama tied as most admired man in 2019 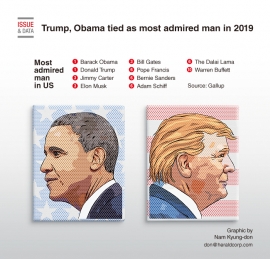 President Donald Trump and former President Barack Obama tied as the most admired man of 2019, according to a Gallup survey in the US.

This is the first year Trump has risen to the top spot in the annual survey and the 12th year for Obama. Each was named by 18 percent of respondents to the open-ended survey conducted Dec. 2-15, 2019.

Obama tied former President Dwight Eisenhower for the most times named as most admired man since the survey began in 1948.

Former first lady Michelle Obama was named as the most admired woman for the second year, with 10 percent of respondents naming her, down from 15 percent last year. First lady Melania Trump came in second at 5 percent. (UPI)