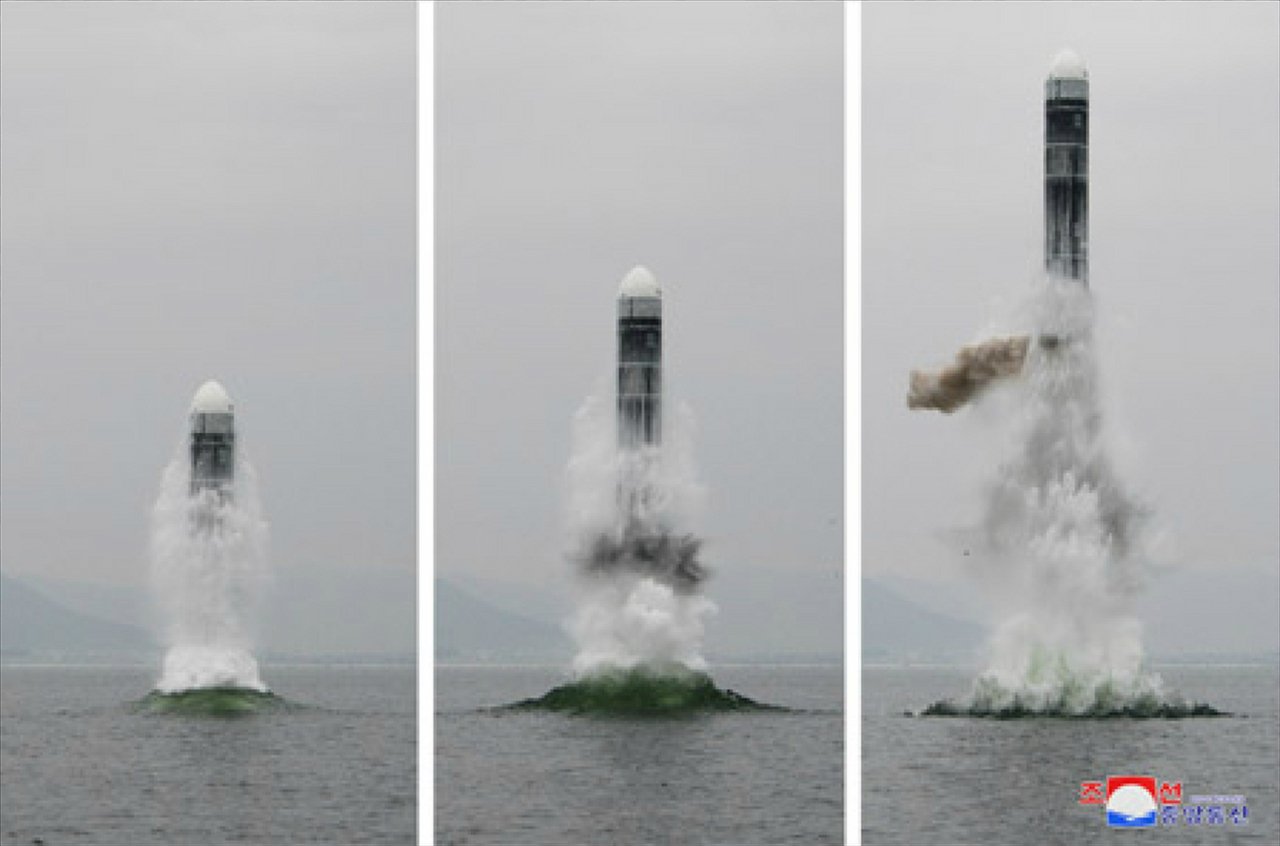 North Korea claims to have tested Pukguksong-3 in waters off Wonsan, Gangwon Province, on Oct. 2, 2019. (KCNA-Yonhap)
Following North Korean leader Kim Jong-un’s warning of a “new strategic weapon,” experts on Wednesday weighed in on the state of the regime’s veiled missile program for clues.

The strategic weapon may be an upgrade of either of the two -- both of which could pose a greater threat to the security of the United States and its allies, as they would be harder to intercept in the air (multiple-warhead ICBMs) or detect before liftoff (SLBMs).

The technologies required are highly complicated and expensive, and only a few countries such as the US, Russia and China hold such weapons.

The term indicates a state’s strategy to operate a sufficiently large and dispersed nuclear arsenal for retaliation in case it becomes the victim, according to Vipin Narang, a political professor at the Massachusetts Institute of Technology.

North Korea will focus on producing more ICBMs with advanced nuclear warheads while advancing its reentry vehicle technology to deliver them to target, Lee said. “It’s not that Pyongyang is keen on prompting a war, but rather, it’s a shift in its nuclear strategy.”

Shin Jong-woo, an analyst at the Korea Defense & Security Forum, told Yonhap News Agency that the only strategic weapon that the regime could demonstrate is a ballistic missile.

Saying the North has carried out what it called a “serious” test at its missile engine site in December, the expert added, “It is likely an ICBM that exceeds the payload of ‘Hwaseong-15,’ the ICBM it test-fired in 2017.”

Some international experts, however, were doubtful as to how close Pyongyang is to mastering required technologies.

While admitting that he is not a rocket scientist, he argued that the international community is not convinced whether Pyongyang has even mastered its single reentry vehicle capability because it hasn’t witnessed the communist state “testing an ICBM reentry vehicle on any of its three ICBM tests in 2017.”

But, Jeffrey Lewis of the Middlebury Institute of International Studies in the US disagreed.

“There’s never been a country that has been able to build an ICBM that hasn’t been able to build a reentry vehicle. I think people have a political agenda when they say that because they don’t want to accept the reality of the situation,” he told Voice of America.

“They have certainly mastered it with every IRBM missiles they have fired including the Musudan and the Hwasong-12,” Bruce Bechtol, a professor of security studies at Angelo State University, told the VOA.

Bechtol added, “It certainly appears based on the data that I’ve seen on the two Hwasong-14 tests and one Hwasong-15 test that they do have capability to enter the atmosphere.”

Bennett noted if North Korea masters the technology with assistance from foreign scientists, as it has usually done in the past, Pyongyang’s new technology could be a “game changer” in the upcoming disarmament discussions with Washington.

On the subject of Pyongyang’s new SLBM test on Oct. 2 and its stage of development, local and international experts mostly see eye-to-eye that North Korea does not have a strong game changer.

“An SLBM couldn’t be a ‘game changer’ as Pyongyang has neither a submarine capable of operations beyond the East Sea nor a missile that flies at least 7,000 km to strike US soil,” Cha Du-hyeon, a visiting professor at the Graduate Institute for Peace Studies at Kyung Hee University, told The Korea Herald.

Bennett maintained that a North Korean SLBM threat is not serious because its submarine carrying the missile is not stealthy, thereby making it vulnerable to US sonar systems.

He said Pyongyang needs much larger and more capable submarines to undertake a nuclear blow to the US. Washington has hopefully made it clear to Moscow and Beijing that it would consider aiding or abetting sales of those submarines to Pyongyang a hostile act, Bennett said.

Pyongyang’s SLBM at this stage isn’t a game changer, yet, he added.