After struggles, Yoo Jae-suk in his second heyday

Yoo Jae-suk had been the nation’s most popular entertainer for more than a decade, but after the hiatus of his signature show “Infinite Challenge” on MBC in 2018, his star seemed to be on the wane.

The weekly variety show was beloved by Korean viewers for 13 years. Yoo and producer Kim Tae-ho rose to stardom with the show, earning top spots in the entertainment industry. 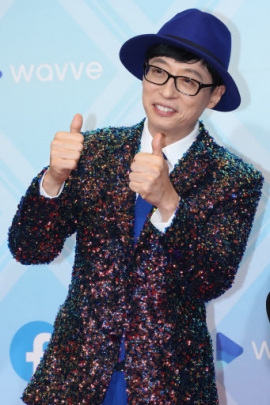 However, after the show ended almost two years ago, Yoo seemed to be experiencing difficulties with his career. He took up new challenges, starring in Netflix’s “Busted,” tvN’s “You Quiz on the Block” and “Laborhood on Hire,” but nothing seemed to match up to his past success.

Yoo later confessed at a press conference in December, “There were no plans after the program (‘Infinite Challenge’), and it is true that I was caught off-guard.”

After struggles, Yoo, however, returned to prominence last year, starting over as rookie trot singer Yoo San-seul in a new variety program “How Do You Play?” on MBC, teaming up again with producer Kim.

The 47-year-old star became a rookie trot singer in the show, learning how to sing, making new songs, and taking part in local festivals.

According to Brand Reputation Report survey, Yoo topped the reputation rankings among entertainers, earning 8,239,310 points, followed by Park Na-rae who earned 5,514,208. It was Park who received the grand prize at the MBC Entertainment Awards.

Yoo is also known for good deed as one of the most beloved entertainers in the country. He donates coal briquettes to those in need each year, the total value reaching 430 million won ($371,972), according to the Babsang Coal Briquette Bank foundation on Wednesday. Yoo met the group through “Infinite Challenge” in 2013.