CJ ENM, the company behind Mnet, has officially responded to the vote-rigging scandal surrounding the cable channel’s flagship audition show.

“I’m extremely sorry for the hurt it caused to many trainees who passionately followed their dreams of debuting,” CEO Heo Min-heoi said at a press conference at the company’s headquarters in Seoul on Monday.

The apology comes after the show’s key producers were found to have fixed the votes for some contestants in return for financial favors from their agencies. In the ongoing investigations, the producers reportedly admitted rigging votes during all four seasons. 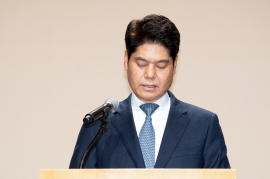 Describing the scandal as “heartbreaking,” Heo said the company plans to give financial compensation to the contestants who were affected by the rigging as well as providing support for their careers.

As part of its efforts to atone, Mnet’s profits from the “Produce” series will be used to establish and run a fund worth nearly 30 billion won ($25.9 million) to help the K-pop industry for at least five to seven years by supporting agencies and songwriters as well as by finding new talent.

It was also announced that Iz*One and X1, groups that were born out of “Produce 48” and “Produce X101,” respectively, will resume their activities “soon.”

The decision comes months after the controversy emerged. In the summer, curious viewers detected a pattern in the vote margins separating the top 20 contestants and began speculating. Even lawmaker Ha Tae-kyung of the opposition Bareunmirae Party chimed in to criticize the cable channel, saying the process was “full of errors.”

As it stands, Ahn Joon-young, a director of the “Produce” series, and the program’s chief producer, Kim Yong-beom, have admitted most of the charges against them in connection with the vote-rigging scandal. Ahn and Kim are among eight people who have been indicted on charges of business obstruction and fraud.

While an internal probe continues, CJ ENM says it has no plans to reveal the victims’ names as it believes this would not be in their best interests.

Since the first season aired in 2016, the “Produce” series continued for three more successful seasons. It has given birth to popular groups like I.O.I, Wanna One and Iz*One.

In the wake of the vote-rigging scandal, Iz*One was forced to cancel the release of its first full album in November, which was then titled “BLOOM*IZ.”

Both Iz*One and X1 were also absent from the 2019 Mnet Asian Music Awards earlier this month.