In Canadian sports, 99 is a sacred number, for it was worn by one of the country's greatest athletes, the hockey legend Wayne Gretzky.

Though in a different sport, South Korean pitcher Ryu Hyun-jin will now don No. 99 for the Toronto Blue Jays, which signed him to a four-year, US$80 million contract. Ryu has had that number throughout his pro career, which began in South Korea in 2006 and shifted to the majors with the Los Angeles Dodgers in 2013. 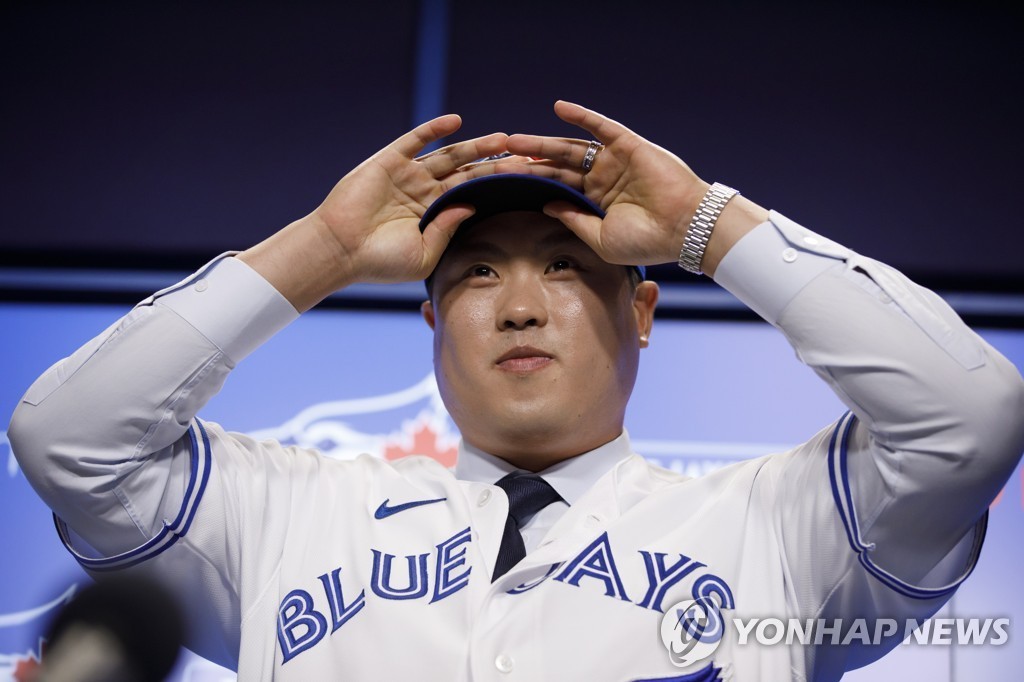 (Yonhap)
While No. 99 is retired across the National Hockey League (NHL), baseball players are free to put it on the back of their jerseys. New York Yankees slugger Aaron Judge wears it, but in Toronto, No. 99 brings with it a far greater burden to whoever decides to put it on, given that hockey is widely popular there and that Gretzky is from Brantford, Ontario, about 100 kilometers west of Toronto.

Is Ryu aware of the significance of that number? His agent, Scott Boras, stepped up to the plate to answer that question during Ryu's introductory press conference at Rogers Centre in Toronto on Friday (local time).

"Canada lent No. 99 to LA, and so with Hyun-jin, we thought we'd return it back to Canada," Boras said with a smile, referring to the stunning trade that sent Gretzky from the Edmonton Oilers to the Los Angeles Kings in 1988.

Hockey reference aside, Boras said the Blue Jays were "very persistent" in their pursuit of his client from the beginning.

"It became very apparent to Hyun-jin that the Blue Jays really understood him and understood what value he could bring to their progressive franchise," Boras noted. "I think from the ownership perspective, it was very clear from our conversations with Mark (Shapiro, team president) that the Blue Jays were ready to move forward and start building a base to complement the young players they have."

And speaking of the young players, Boras, a super agent who's never shied away from wordplay or puns, once again reached into his bag of tricks.

"Canada has the Royal Canadian Mounties, and the Blue Jays have kind of their 'royal youth uprising,' so a 'ryu' for Ryu, if you will," Boras said.

"Having a dynamic to it with the youth here, we really felt the components would synergize the franchise."

Boras also said he expects Toronto's budding youngsters to soon start playing in more meaningful games, which will accelerate their growth. He cited examples of two of Ryu's former Dodgers teammates, Corey Seager and Cody Bellinger, who started getting into postseason games right from the get-go.

"You have young players from baseball royalty. They've been raised in clubhouses, and they have the skill level that allows them to be considered differently than other young players that arrive in the majors," Boras said of Guerrero Jr. and his mates. "They're going to have a dramatic impact on the franchise. Being in situations where the game is on the line... those situations develop players a lot quicker and allow them to play at playoff-level caliber much earlier in their career. We expect the royal youth of Toronto to continue to grow." (Yonhap)