Shin, who led South Korea at last year's World Cup in Russia -- where they famously ousted defending champions Germany -- is expected to be formally unveiled on Saturday.

"We have invited Shin to finalise the contract. After that he will be introduced later on Saturday," Mochamad Iriawan, chairman of the Football Association of Indonesia, said in a statement Friday. 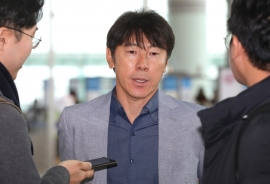 "Hopefully all the process will run well."

The expected appointment of Shin, 50, comes after the PSSI sacked Scotsman Simon McMenemy in November with Indonesia bottom of their 2022 World Cup qualifying group on zero points from five games.

Indonesia also floundered in last year's Southeast Asian championship, the Suzuki Cup, where they finished fourth out of five teams in their group.

Indonesia have had significant problems off the pitch, with the two former chairmen leaving the PSSI this year amid match-fixing allegations.

In October, Indonesia's football association was slapped with a $45,000 FIFA fine over crowd chaos that erupted at a match against Malaysia in Jakarta.

Indonesian football and its professional league have been tarnished by a host of problems, including match-fixing scandals and deadly hooliganism. (AFP)