On Wednesday, the organizers -- local government of Hwacheon and Nara Foundation -- tested the ice condition of Hwacheon River, where the Hwacheon Sancheoneo Festival’s signature program that allows visitors to catch sancheoneo -- a species of trout known to live only in very clean freshwater-- takes place. 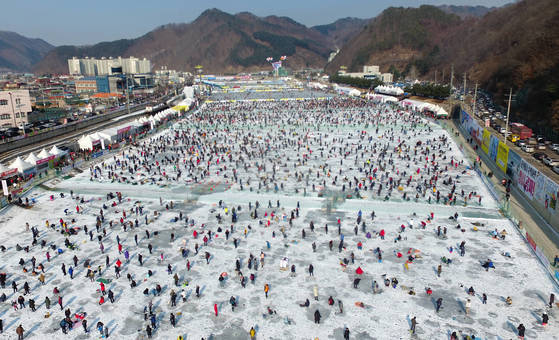 “We normally consider it safe to start our festival when the ice is around 2 centimeters thick. Currently, the river does have 2-centimeter thick ice, but the problem is that it is not hard enough,” a Nara Foundation official told The Korea Herald.

Nara foundation said that the ice problem is due to the warm temperature. This week recorded a daytime average of 7-8 degrees Celsius.

The organizer added that the 23-day festival will be able to commence on Jan. 11 since the temperature is expected to drop to minus 10 degrees Celsius next week and get colder in the following week.

The foundation also said that it will minimize any inconveniences that might occur to foreign visitors by partially opening the upstream of the river, which consists of comparably harder ice, from Jan. 4. Addressing the possibility that this site might get too crowded, the organizers explained that it will not be an issue, as only up to 10,000 foreigners typically visit per day on average.

Launched in 2003, the event was chosen as the nation’s best festival by the Culture Ministry in 2010. Last year, the festival successfully drew 1.84 million tourists, an increase of 6 percent from the previous year.