Watch a show, have a drink, too

Sejong Center for the Performing Arts in central Seoul took a step this week to make year-end concerts more festive and fun, allowing people to bring drinks, including alcohol, into the shows.

On Tuesday, before the start of “Introduction to Indie Music” at the Sejong Center’s S Theater, several people stood around the lobby with plastic cups of beer in their hands. A temporary bar was set up in one corner of the lobby where patrons could grab a cup at 8,000 won ($6.90) apiece. 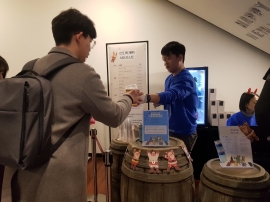 A man buys a cup of beer from a pop-up bar set up at the Sejong Center’s S Theater on Wednesday. (Choi Ji-won/The Korea Herald)

For the Christmas and year-end season, the Sejong Center is seeking to bring about a change to the mostly staid and rigid atmosphere of its concert venues by allowing people to imbibe with their drink of choice inside S Theater, a 300-seat theater that hosts music and drama performances.

Guests may bring in one cup of any drink into the theater. To promote the change, the Sejong Center has partnered with Jeju Beer Company, which will sell its beer in the lobby for the duration of the indie music concert scheduled to run through this weekend. Each person is limited to two cups of beer.

To ensure safety inside the dark theater, people may bring in only plastic cups or bottles. Glass bottles and cans are not allowed. 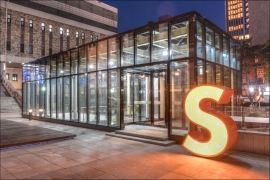 Although only drinks are allowed at this time, the center plans to allow a limited variety of food into the theater in the future.

“Starting with the more casual concerts which people can enjoy better in a more relaxed environment, we are planning to permit drinking and eating in more shows next year,” a Sejong Center official said.

Except for Lotte Cinema’s musical theater Charlotte, which has been allowing ice cream and drinks in closed containers at shows since 2009, Sejong Center is the first such performance venue in the country to allow the consumption of alcohol inside.

Although concerns have been raised about possible noise and disturbances, most people seemed to welcome the Sejong Center’s change.

“I enjoy drinking but I brought a coffee instead because I didn’t want to leave for the restroom in the middle of the concert,” Oh Hyun-joo, 26, said while she waited for her friend standing in line for beer.

“I usually take a can or two of beer to the cinemas, and it’s great that I can now do the same for concerts,” Hur Yon-son said, with a cup of beer already in hand. “I feel I can be more relaxed and enjoy the show more, and I think a small amount of drink will be harmless.”

Indie musician Hello Gayoung performed Tuesday and Wednesday. On Friday and Saturday, “Introduction to Indie Music” will feature Han All on the stage, followed by Sung Jin-hwan on Sunday.