Rubbing shoulders with some of the most established, elite sushiya in Seoul, newcomer Sushi Sakau bucks tradition on many levels. 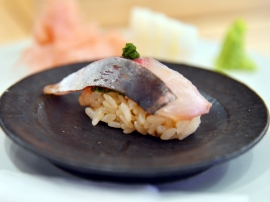 “It is just me, my wife and my friend,” owner-chef You Jong-tea, 32, said in explaining how keeping staff to a bare minimum and trekking out to the fish market instead of using a middle man has helped him shave won off the menu.

You not only decided to open a wallet-friendlier sushiya in a neighborhood known for expensive sushi, he also deviated from traditional Edo-style sushi with unconventional additions like salmon.

His reasoning was simple; his wife likes it and if traditional Edomae sushi features salmon roe, then why not salmon?

Also, instead of the usual chawanmushi -- egg custard -- served at the beginning of the meal, Sushi Sakau kicks off with soup, and for dinner, one might be surprised by Sakau’s variation of inarizushi, which features tuna in a deep-fried tofu pouch.

That said, neither You nor his friend, whom he met while working at a well-known sushiya in Seoul, are trying to revolutionize the sushi scene with maverick maneuvers.

“I don’t want to lose that initial passion and I aim to stay true to the basics,” said You. 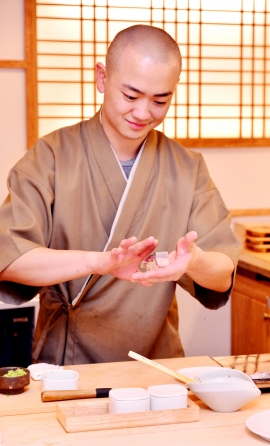 Sakau opened in Seoul’s Sinsa-dong in August, a short distance away from Dosan Park.

The space, which totals 10 seats all around the counter, is designed for plenty of interaction between sushi chef and diner.

“We want to communicate with our customers,” You said.

Once seated, the meal commences, after soup, monkfish liver and sashimi, one gets a taste of Sakau’s sushi.

That initial taste reveals that Sakau’s sushi rice is crafted so that each grain is distinctly separate and slightly fluffy.

One can taste the tang of vinegar, which is not too overpowering, in the shari -- sushi rice -- as well, and as is expected of well-executed shari, the rice is about body temperature, warm but not too warm.

“I feel that acidity is important,” said You, who divulged that three different vinegars are used to craft the shari. 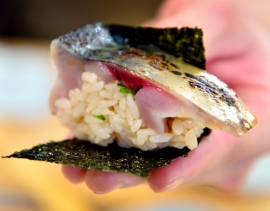 Acting as a pleasant canvas to the neta -- sushi topping -- Sakau’s shari feels neither bold nor muted, but somewhere in between.

When paired with aji -- horse mackerel -- the tang in the rice complements the slight oiliness of the fish, which is heightened by fragrant shiso and a scallion paste that derives its notable flavor, You revealed, from a specific vinegar used to make it.

“It was my friend’s idea,” You sent a nod to his fellow sushi chef.

Then there is Sakau’s hefty and toothsome saba – mackerel -- sushi which is served swaddled in lacquered dried laver -- a delicacy generally reserved for their dinner omakase.

Pickled ginger, scallion and shiso pair well with this unctuous fish, while the sweetness of the dried laver is heightened by the slight salinity of the lightly seared mackerel. 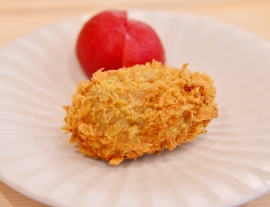 Towards the end of the meal, a croquette crafted from kane miso -- crab entrails -- crabmeat and potato is served with two pickled tomatoes.

One can sense how important vinegar is to You and how the acidity from the vinegar plays a key role in the sushi rice, the neta and the dishes at Sakau.

It will be interesting to see how he and his friend use it to heighten the omakase experience at Sakau from season to season. 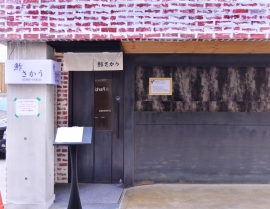