The Cleveland Museum of Art recently acquired a rare Buddhist painting from the Goryeo Kingdom period in the 14th century, depicting the afterlife.

“The Fourth King of Hell” is from a series of paintings depicting the 10 Buddhist kings of hell, according to the museum’s press release dated Dec. 19.

The practice of painting the 10 kings of hell developed in China during the Tang dynasty (618-907) and this practice was subsequently adopted in Korea and perfected during the Goryeo Kingdom (918-1392). 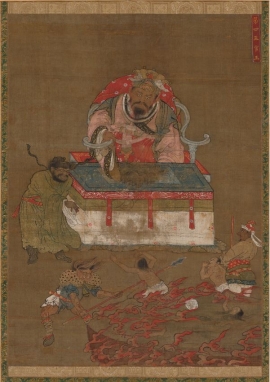 In the Buddhist painting, the king is seated behind a desk, staring at a group of figures in the foreground. The king’s secretary orders the prison guards to carry out the king’s wishes, and at his orders a prison guard pierces a sinner with a burning spear to drop him into a giant cauldron of boiling water. A sinner suffers in the boiling water while another man sits outside the cauldron, praying with his hands clasped.

Sophisticated compositions, subtle brushwork and use of color, and generously applied gold highlights are the distinctive characteristics of the 14th century Goryeo Buddhist paintings produced in the royal painting workshop, the museum said.

“As similar paintings depicting the 10 kings of hell were produced in different parts of East Asia -- including China and Japan -- around the same period, the paintings portray the common Buddhist faith shared in the region at the time,” said Yoo Su-ran, an arts researcher at the National Museum of Korea.

Yoo noted the significance of the painting acquired by the Cleveland Museum of Art, saying only around 160 Buddhist paintings from the Goryeo Kingdom remain. Also, the painting is from the only suite of paintings of the 10 kings of hell in which most of the pieces are still extant.

According to Yoo, only nine paintings remain from the original set of 10. The nine pieces are believed to be scattered around the world, with three of them housed at the National Museum of Korea. The Cleveland Museum of Art, in its press release, also said the Arthur M. Sackler Museum at Harvard University and the Honolulu Academy of Arts hold some of the paintings in the suite.