[ The Korea Herald – Send E-mail ]
[Diplomatic circuit] Bangladesh beams with strong economic growth prospects
Bangladeshi foreign minister says the country is an “ideal fit” for Korean businesses
By Kim Bo-gyung
Published : Dec 23, 2019 - 18:26
Updated : Dec 23, 2019 - 18:28
DHAKA, Bangladesh -- The hustle and bustle of Bangladesh, one of the fastest-growing economies worldwide, can be seen throughout the capital of Dhaka, where multiple infrastructure projects are underway, including highway construction projects.

Having risen from one of the world’s least developed countries to a developing country in less than 50 years since its liberation from Pakistan, Bangladesh is well on its way to achieving its goal of becoming a middle-income country by 2021.

“This year, like any other year, is always celebrated to mark the liberation of our country and its emergence from a ‘basket case’ to an economic tiger,” Bangladeshi Foreign Minister A. K. Abdul Momen told The Korea Herald.

Momen’s comments were made at a dinner attended by some 36 delegates from 20 countries at the State Guest House in Dhaka on Saturday. The foreign delegation visited Bangladesh from Dec. 14-21 to mark the upcoming 100th anniversary of the birth of the country’s founding father, Sheikh Mujibur Rahman, in 1920.

“This celebration … shows the progress the country has made in its journey from immense suffering (and) starvation to a net producer of food and 8 percent (annual) GDP growth over the last 10 years. All of these would not be possible without the liberation from Pakistan, so yes, this and every subsequent year’s anniversary of liberation will be marked with grandeur,” he added.

According to the World Bank, this year Bangladesh is expected to record real GDP growth of 8.1 percent year-on-year, up 7.9 percent from a year earlier. 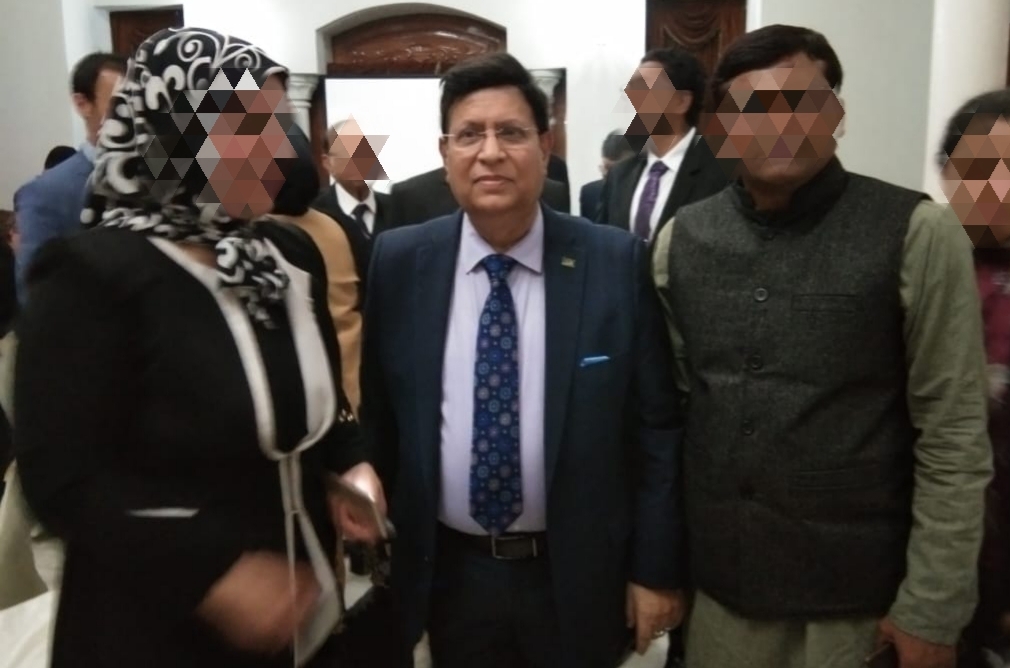 Bangladesh Foreign Minister AK Abdul Momen (center) attends a dinner with the foreign delegation at the State Guest House in Dhaka, Bangladesh, Dec. 21. (Courtesy of Mahendra Ved)
To capitalize on this growth, a growing number of South Korean companies are seeking opportunities in the country, which saw a boost from the visit of Korean Prime Minister Lee Nak-yon earlier this year.

“Bangladesh is an ideal fit for Korea as almost 50 percent of the population in Bangladesh are below 28 years old and this means labor is easily available, easy to train and are disciplined as well as productive,” Momen said.

In 2007, JPMorgan Chase & Co. ranked Bangladesh No. 4 in the world in terms of the growth of its economically active population. This assessment was based on the country’s improvements in education, its judiciary system and press freedom, among other factors.

“Bangladesh welcomes Korean investments. … We value traditions and such cordial relationships. … South Korea (companies) moved into Bangladesh, set up production plants and started exporting their products to the world. ... The highly attractive investment incentives provided by the one-stop services investment center is a big plus point,” he said.

Korea was the first foreign country to enter Bangladesh’s garment industry in the 1970s. As of 2019, some 20 Korean companies operate in its garment sector, creating some 33,000 jobs mostly for locals.

Meanwhile, asked how India’s controversial Citizenship Amendment Act will affect Bangladesh’s relationship with the neighboring country, Momen said it has “created fear” among those living in the Assam region, which shares a border with Bangladesh.

“This is India’s internal issue. India is a very good friend of Bangladesh and whatever decisions India makes, it may have an impact on Bangladesh and other surrounding countries,” Momen told The Korea Herald.

“While we respect India’s rights to enact its own laws which it deems fit for their national interest, Bangladesh … hopes for prudence as the Citizenship Amendment Act has created fear amongst our people who have lived there for decades.”