Jeff Passan of ESPN reported on Sunday (US Eastern Time) that Ryu has agreed to a four-year deal worth $80 million, citing multiple sources. Other reports said the deal has a full no-trade clause and no opt outs.

The Blue Jays have not yet confirmed the deal. If the deal is finalized, Ryu will be the second South Korean player to play for the Jays, after reliever Oh Seung-hwan, who spent half of 2018 season before being dealt to the Colorado Rockies. 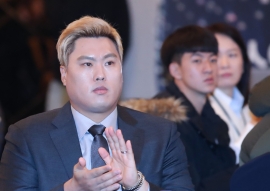 Ryu led Major League Baseball with a 2.32 ERA in 2019 while pitching for the Los Angeles Dodgers, and he finished second in the National League Cy Young Award voting. Ryu was also the NL starter at the All-Star Game and was the biggest name left in the pitching free agent market this winter.

Ryu, the 2006 regular season MVP and Rookie of the Year in the Korea Baseball Organization, signed a six-year, $36 million deal with the Dodgers via posting before the 2013 season. He compiled a 54-33 record with a 2.98 ERA in 125 starts with the Dodgers.

After last season, Ryu bet on himself by accepting the Dodgers' one-year qualifying offer worth $17.9 million, rather than testing the open market. And Ryu had the best season of his career, winning the ERA crown and becoming the first Asian pitcher to earn a first-place vote in the Cy Young race.

That set up Ryu nicely for a big pay day and given his age, this may well be the last multiyear contract he signs in the majors.

Represented by super agent Scott Boras, Ryu has been drawing interest from multiple clubs throughout the offseason. And if the deal is confirmed, Ryu will be the highest-paid South Korean player in major league history in terms of average annual value with $20 million.