In his sunset years, a civil engineer-turned-photographer has been making his name at international photography competitions.

Over the past five years, professional photographer Ryu Shin-woo, 76, has won 2,420 acceptances for 352 works in 466 competitions across 73 countries,  sponsored by the Federation Internationale de l’Art Photographique, also known as the International Federation of Photographic Art. 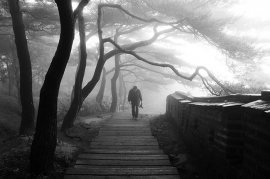 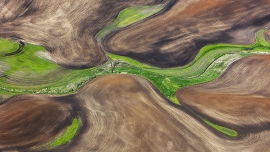 “Palouse” was taken from a light aircraft flying above the wheat fields of the Palouse in the US state of Washington. It received the Gold Medal at competitions held in Argentina, Bulgaria and France.  (Courtesy of Ryu)

The federation, a nongovernmental organization recognized by UNESCO, connects national photography associations around the world. South Korea is represented by the Photo Artists Society of Korea.

“I originally just saved up the digital files of my photography on the computer. But one day, I realized the files would be digital trash when I die,” Ryu told The Korea Herald on Monday during an interview in southern Seoul. Since 2015, Ryu has participated actively in international photography competitions.

“It is as if I am having my possessions valued. To be evaluated for my works and to wait for the results are exciting events that energize my senior years,” he said.

To this day, Ryu travels across Korea and the world, including Iceland and the US, driving for hours to capture that “perfect moment,” like any other photographer.

“I would not be able to climb a mountain for leisure. But if there is a camera in my hand, I will crawl to the top, dreaming of a masterpiece,” Ryu said. 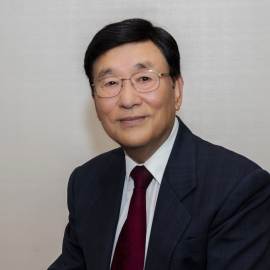 As a civil engineer he participated in multiple dam-building projects, and he once received a presidential award for his work on the Daecheong Dam in North Chungcheong Province. Through the projects, he learned to appreciate the beauty of nature.

“Dam construction is about creating an eco-friendly artwork in nature. I often was awed by the beauty of nature on construction sites. The experience led me to a career in art photography,” he said. 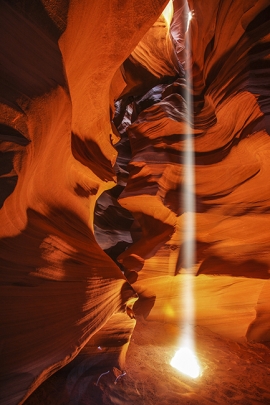 "Light Beam" was shot in a subterranean cavern in Arizona's Antelope Canyon. It received the Gold Medal at a competition held in the US. (Courtsey of Ryu)

“From time to time, photographers have to edit their photos to express creative art. Photographers are sometimes poets, as they have to imply things through objects. Other times, they are like novelists, creating fiction and delivering a story through their photos.”