Yuka Momiki converted an 88th-minute penalty, awarded after defender Shim Seo-yeon's handball violation in the box, and the Nadeshiko Japan held on to win the East Asian Football Federation E-1 Football Championship for the third time.

The two sides fired blanks at one another for most of the tight, defensive affair at Busan Gudeok Stadium in Busan, 450 kilometers southeast of Seoul, until Shim's miscue set up the decisive penalty for Japan. South Korea fell to 4-10-17 (wins-draws-losses) all-time against Japan. 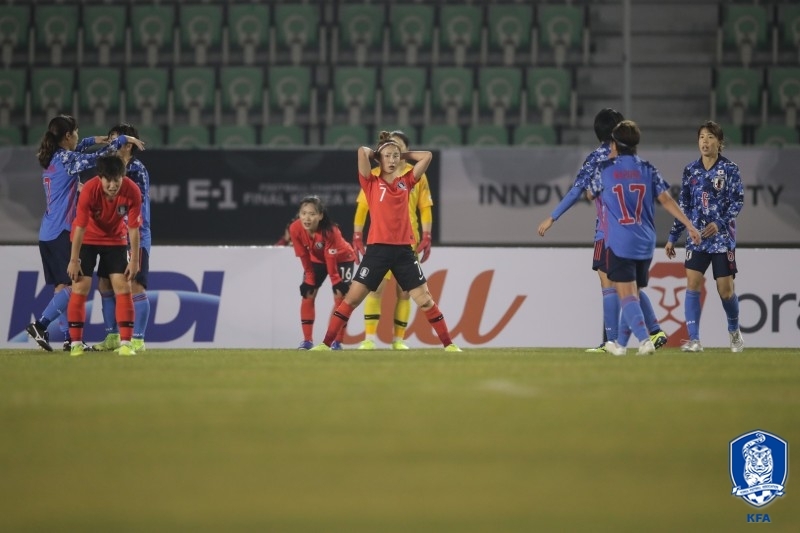 (Yonhap)
Japan finished with a perfect 3-0-0 record for their first EAFF title since 2010. South Korea took second place with four points at 1-1-1.

China (1-1-1) also had four points but South Korea had the edge in the goal difference tiebreaker, plus 2 to minus 2. Chinese Taipei (0-0-3) brought up the rear in the four-nation tournament.

Coached by Colin Bell, South Korea were trying to win their first EAFF title since the inaugural event in 2005.

South Korea had a 0-0 draw against China to open the tournament last Tuesday in Bell's first match, and then blanked Chinese Taipei 3-0 last Sunday to hand the Englishman his first victory as South Korea head coach.

The 20th-ranked South Korea played some dogged defense to keep the world No. 10 Japan at bay early, though the home team managed just one shot at the other end in the first half.

South Korea upped their attacking pressure in the second half while holding their ground on defense. But with the clock ticking, Shim had a shot by Momiki go off her left arm in the box for the crucial violation. Momiki herself stepped up for the spot kick and struck it past Yoon Young-geul for the match's lone goal.

Bell should have his full lineup when South Korea host the third round of the Asian qualifying for the 2020 Tokyo Olympics from Feb. 3-9 next year on Jeju Island. North Korea, Vietnam and Myanmar will be South Korea's opponents in Group A. The Group B teams are Australia, China, Thailand and Chinese Taipei

The top two teams from each group will move on to the final round scheduled for March, and the top two from there will qualify for the Olympics. South Korea have never played at the Olympic women's football tournament, first contested in 1996.

The South Korean men's team will take on Japan at 7:30 p.m. Wednesday with the men's EAFF title on the line. (Yonhap)