The name Whitney Houston takes many straight back to the 1980s and ’90s.

The US singer took the world by storm soon after her 1985 debut. Her first two studio albums, “Whitney Houston” and “Whitney” topped the Billboard charts for weeks.

Enjoying a huge success in the music scene, the singer took a leap to the big screen, making her acting debut on the film “The Bodyguard” in 1992. She recorded six new songs, including the iconic track “I’ll Always Love You,” for the film. 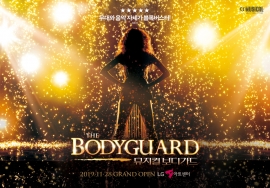 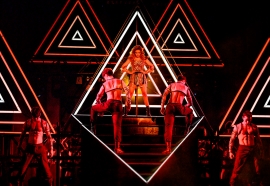 The musical version of “The Bodyguard” was produced in 2012 in London and in Korea, a licensed version was staged in 2016.

The show which pays homage to the iconic diva returned this year, putting the love story of pop star Rachel Marron and her bodyguard Frank Farmer onstage.

The main plot remains the same as the 1992 film, but the show has made some changes to the details. The story is set in the present, unlike the film set in the 1990s, and more attention is given to Rachel’s sister Nicki.

Rachel, a big-name pop star, is constantly threatened by a stalker. Rachel’s manager hires Frank, a former US presidential bodyguard to deal with this.

Like most other love stories, Rachel and Frank first dislike each other, as Frank tries to keep the free-spirited Rachel in the house for her safety, but in the end, they fall in love.

Though feeling threatened, Rachel attends the Oscars for her sister, and her stalker awaits at the venue with a gun, ready to attack. Spotting the stalker, Frank runs to the stage to save her.

The musical is glamorous, telling the story of a big name pop star in her heyday who takes to the stage with powerful vocals and high-energy choreography. Nicki’s “reasonable jealousy” toward her star sister adds some depth to the story.

But some parts of the storyline are awkward. As there isn’t much description of the stalker, it is hard to understand how he developed his obsession for Rachel and whether he wants to be with her or to hurt her.

Also, it is hard to follow the way Frank and Rachel’s relationship develops. The breakup seems quite unnecessary, with not much explanation given as to why Frank has to leave Rachel.

Nonetheless, the musical production pays homage to the late diva Whitney Houston, featuring her greatest numbers, such as “I Will Always Love You,” “I Have Nothing,” “Greatest Love of All,” and more.

Son, the “Voice of Korea” star who is recognized for her powerful singing, was in the previous 2016 licensed production, too. At the Dec. 11 performance, she seemed remote, unable to blend in with the other cast members, as if she were starring in her own solo concert.

All in all, “The Bodyguard” is a nostalgic jukebox musical that brings back the tunes of Whitney Houston and the glamour of her golden days, before her tragic death in 2012.

The musical continues until Feb. 23 at the LG Arts Center in Gangnam-gu, southern Seoul. Tickets cost from 60,000 won to 140,000 won, and are available at ticket.interpark.com.