Gallup Korea announced the findings of its annual survey on athletes Thursday. In a poll of 1,700 South Koreans over the age of 13 from Nov. 8 to 28, Son earned an overwhelming support of 82 percent. Respondents could select up to two athletes. It's the highest level of support since the poll began in 2007.

Ryu Hyun-jin, a free agent pitcher who played for the Los Angeles Dodgers in 2019, was a distant second with 38.7 percent. 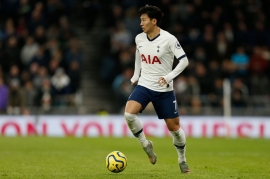 Son is wrapping up a fine year with the Spurs. During the 2018-2019 season, Son netted 20 goals in 48 matches and helped guide Tottenham to their first UEFA Champions League final.

So far in the 2019-2020 season, Son has already scored 10 goals in 20 matches, including a career-high five goals in the Champions League after just five contests.

Last weekend, Son scored a breathtaking wonder goal against Burnley, which featured an outstanding 70-meter solo run from the Spurs' penalty area to the other. The stunner had the football world buzzing and is being touted as the goal of the season in the Premier League.

Ryu finished in second place behind Son for the second straight year. The left-hander led Major League Baseball with a 2.32 ERA and was the runner-up in the National League Cy Young Award voting. Ryu became the first Asian pitcher to earn a first-place vote in the Cy Young race.

Lee, an 18-year-old wunderkind, carried South Korea to the final at the FIFA U-20 World Cup in Poland this past summer. Though South Korea lost to Ukraine in the final, Lee still won the Golden Ball as the best player of the tournament. It was the best finish by a South Korean team at any FIFA international competition.

Texas Rangers' outfielder Choo Shin-soo ranked fourth in the poll with 4.7 percent. At age 37, Choo set a career high with 24 home runs this year while playing in 151 games, the most in four years. He's now strung together three straight 20-homer seasons, the longest of his 15-year career.

The poll's margin of error was plus/minus 2.4 percentage points, with a confidence level of 95 percent. (Yonhap)