MELBOURNE -- Two South Korean rookies earned a victory apiece on the opening day of the Presidents Cup golf competition here on Thursday, as the International Team jumped out to a surprising 4-1 lead over the heavily favored United States.

Im Sung-jae teamed up with Adam Hadwin of Canada to defeat Patrick Cantlay and Xander Schauffele 1-up in the second four-ball match of the day at Royal Melbourne Golf Club.

Right behind them, An Byeong-hun and Adam Scott of Australia beat Tony Finau and Bryson DeChambeau 2 and 1. 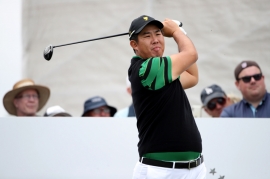 In four-ball, players each hit their own balls, and the better score of the two becomes that team's score on a given hole.

Im, the reigning PGA Tour Rookie of the Year, gave his team an early lead with a chip-in eagle at the first hole. Cantlay birdied the sixth to even the score, and a par by Schauffele put the Americans ahead 1-up.

Im's par at the ninth made it a tie match once again, and Hadwin gave his team the lead for good with a par at the 16th.

An, a last-minute replacement for injured Australian veteran Jason Day, had a birdie at the sixth to give his team a 1-up lead.

Scott's birdie at the ninth made it 2-up for the International side.

Finau's birdie at the 12th cut the International lead to 1-up, but Scott came right back with a par at the 13th that restored a 2-up lead. The Americans failed to narrow the gap further.

For the US, only the duo of playing-captain Tiger Woods and Justin Thomas got a victory, as they beat Joaquin Niemann of Chile and Marc Leishman of Australia 4 and 3.

The competition will conclude on Sunday with singles matches, with all 12 players per side to be in action.

Im and An are two of seven rookies for captain Ernie Els on the International Team.

Of the 12 previous Presidents Cups, the US won 10 and the International Team won one, in 1998 on the same Royal Melbourne Golf Club. The 2003 competition in South Africa ended in a tie. (Yonhap)