Paik Nam-june is inarguably the foremost video artist in South Korea. But who else can we talk about when it comes to video art, and what are the distinctive characteristics that other Korean video artists have developed?

The exhibition “Korean Video Art from 1970s to 1990s: Time Image Apparatus” at the National Museum of Modern and Contemporary Art, Korea’s Gwacheon venue in Gyeonggi Province chronicles video art in Korea between the 1970s and the 1990s, presenting some 130 works by Paik and others who later adopted video in their works. 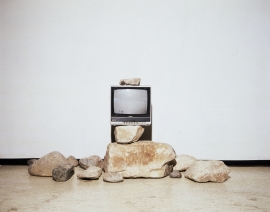 Another seminal work by Paik included in the exhibition is “Global Groove,” a 28-minute video collage of performances by dancers, artists and musicians, accompanied by different types of music.

“Global Groove” (1973) had a great impact on Korean artists, including Park Hyun-ki, who saw it for the first time at the Daegu American Cultural Center in 1974. After seeing the work, Park began using video in his installation works.

“While the art scene in Seoul was relatively conservative in embracing new mediums of art, the art scene in Daegu was more open to new influences. Artists like Park Hyun-ki and Lee Kang-so were some of the artists based in Daegu who took that freedom to pioneer art experiments,” said the exhibition’s co-curator Bae Myung-ji.

Park’s works at the exhibition include a number of video installations, such as the video stone tower displayed at the 1979 Sao Paulo Art Biennale and the 1980 Biennale de Paris.

There is also a series of photos documenting Park’s performance at the Sao Paulo Art Biennale, titled “Inclining Water.” In the photos, Park tilts a video displaying an image of water that is also tilting, creating the illusion that the television is filled with water.

Park’s video installations, which use objects found in nature, are often described as “meditative.” Park’s works, in that respect, are sometimes associated with the mono-ha movement that started in Japan, according to some art critics.

“Park is perhaps the second most important video artist from Korea,” Bae said. “Interest in Park is also growing in the global art scene.”

One of Park’s video works created in 1978 was recently acquired by the Museum of Modern Art in New York. A curator from Australia recently visited the exhibition to consider Park’s works for a future exhibition featuring video artists from Asian countries, including Korea, Japan and China, according to MMCA officials.

Video sculptures from the time are spotlighted in detail in the third section, titled, “Video Sculptures and Kinetic Video Art.”

“When minjung art and monochrome paintings were popular, many artists here tried to find alternative mediums. Video was one of them. The difference, however, is that video was sought by sculptors,” curator Bae said. 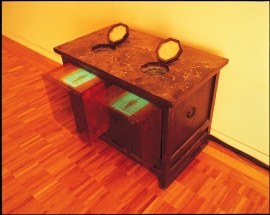 Yook Tae-jin’s “Ghost Furniture” (1995) is a low-tech installation made of old traditional Korean-style furniture and video monitors. The screens are set up in drawers that constantly move back and forth, showing a man walking up a flight of stairs.

Another video sculpture on view is Moon Joo’s “Sea of Time” (1999), an installation of small monitors. In this work, the monitors, lined up in a row, show images of the horizon on the sea. Each monitor is designed to move up and down to make the water appear to be in motion like waves.

The exhibition also presents different types of artworks that use video, some by less-discussed artists and others by globally famous artists, such as Lee Bul and Kim Soo-ja.

The exhibit runs through May 31 next year.