S. Korean An Byeong-hun determined to make most of new opportunity at Presidents Cup

MELBOURNE -- As a last-minute addition to the International Team at this week's Presidents Cup, South Korean golfer An Byeong-hun said Tuesday he is keen on capitalizing on his second chance.

An was named as an injury replacement for Jason Day of Australia on Nov. 30, as International captain Ernie Els went with the South Korean just weeks after leaving him off the team.

The Presidents Cup pits a team of a dozen non-European international players against the United States. This year's competition will run from Thursday to Sunday at Royal Melbourne Golf Club in Melbourne.

For the International Team, the top eight players based on world ranking points accumulated from Aug. 27, 2018, to Aug. 18, 2019, earned automatic spots. One South Korean player, Im Sung-jae, was chosen with one of Els' four captain's picks in early November. 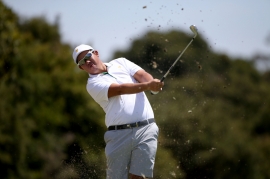 At the time of the selection, Els said he had come close to picking An as well. An, the 2015 European Tour Rookie of the Year, finished 15th in the International Team standings to miss out on the automatic selection.

But Day's withdrawal due to a back injury gave Els an opening to go with the in-form South Korean.

"I got a phone call twice, unfortunately and fortunately. First one was saying I'm not in," An said at Tuesday's press conference.

"It was a tough call. Obviously, I was disappointed, but I never thought I would get a second call. They said, 'We need you on the team.' I was like, 'I'll go down and play.' I'm here and I'm looking forward to my first Presidents Cup."

Im and An are both Presidents Cup rookies. The competition began in 1994, and this is only the second time that multiple South Korean players will represent the International Team.

"I was looking forward to this moment in the last five years, and I'm finally here," An said. "Especially playing for Ernie, we know how much he wants this badly. We've had loads of team meetings. I think we all know what he wants and what we want. It will be exciting."

An, who practiced with Marc Leishman of Australia, Hideki Matsuyama of Japan and Abraham Ancer of Mexico on Tuesday, described the team's atmosphere as buzzing with positivity and excitement.

"Ernie's trying to make us feel comfortable. We have a lot of rookies, and everybody seems like they are having a good time," An said. "Ernie keeps telling us you're the best players in the world and you have a chance to compete against the US Team."

The US Team is loaded with talent, such as playing captain Tiger Woods and former world No. 1s Justin Thomas and Dustin Johnson. But An said the competition will not be as lopsided as people may think.

"A good start helps, but we know our abilities," he said. "If we play our golf, it's going to be close. We've got to get a hot start (on Thursday's four-ball). Definitely, we need some points so we have a chance on Sunday because two years ago that wasn't the case."

An said replacing Day, a former world No. 1 who was expected to be the crowd favorite, puts "extra pressure" on his shoulders, but he'll try to control what he can control.

"Hopefully, I can be as good as (Day) and try to get as many points as he's done in the past," An said. "I know I'm playing decent golf, and as long as I play my golf, I think we have a very good chance." (Yonhap)