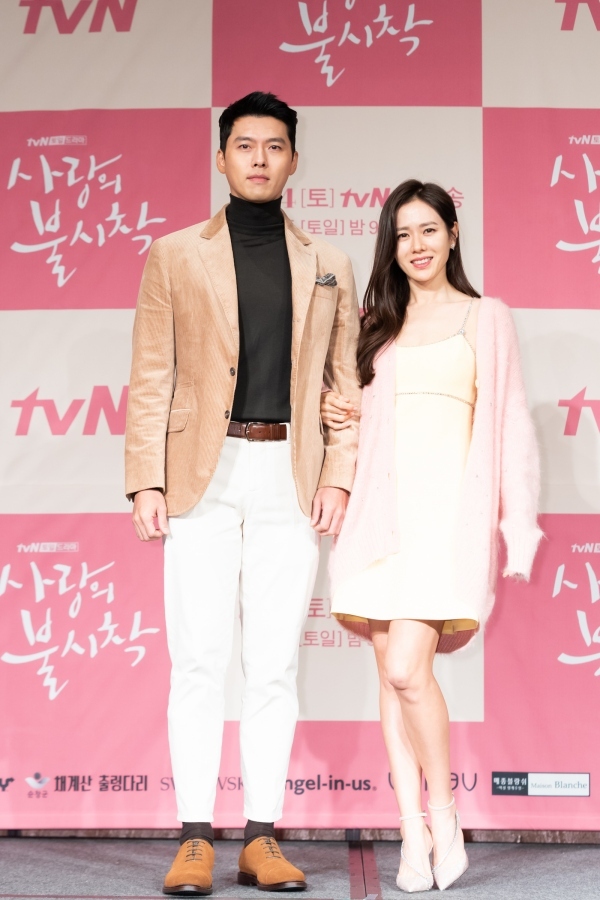 Hyun Bin and Son Ye-jin pose at a press event for the new drama series “Crash Landing on You” at Four Seasons Hotel Seoul in Gwanghwamun, central Seoul. (CJ ENM)

Yoon, played by Son, soon falls in love with the North Korean officer, played by Hyun Bin, who tries to help the accidental defector in the isolated country.

The drama was written by star screenwriter Park Ji-eun, who was also behind “My Love from the Star” and “The Legend of the Blue Sea,” which were popular around the world. The two dramas helped actress Jun Ji-hyun rise to global stardom.

Director Lee Jeong-hyo said he was baffled when he first received the script, as he thought that North Korea and a love story might not match well. However, he eventually fell for the “extraordinary story.”

“The script was really fun,” Lee said at a press event in Gwanghwamun, central Seoul, on Monday.

Lee said he had to be creative for the North Korea scenes. As actual filming in the North is impossible, the shooting team had to make trips to Mongolia and Jeju Island instead.

Earlier this year, Hyun Bin and Son were rumored to be dating after photos of them shopping together were released. But they have denied the rumor. The two starred together in the movie “The Negotiation” released last year.

“The rumor did not affect my decision to take part in the drama,” Hyun Bin said. “In the previous film, Son and I actually did not have a chance to meet due to the unique shooting schedule, but I always wanted to act with Son closely, and I am learning a lot from her through this drama.”

Asked whether the rumor affected the casting, director Lee jokingly said, “I took the rumor positively, assuming the chemistry between the two should be already good.”

The 16-episode drama will air every Saturday and Sunday on tvN at 9 p.m. starting this week. It will be released simultaneously on Netflix.