Though French restaurants are at better odds to be included in the La Liste, a gastronomic ranking system based in France, a total of 22 restaurants in Korea have made it in the recently released 2020 edition of the list.

Like that of last year, French fine-dining restaurants Guy Savoy in France and Le Bernardin in New York took the top spots, earning 99.5 points each. Japan also made a presence, with Ryugin and Sugalabo earning top marks. 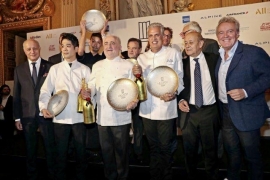 Awardees of the 2020 La Liste pose for photos at an awards ceremony held on Dec. 2 in Paris, France. (La Liste)

Meanwhile, Korean fine-dining restaurant La Yeon at The Shilla Hotel in Seoul and contemporary Korean restaurant Mingles, also in the capital, joined the top 150 list for the first time for a Korean restaurant, marking 94 points each.

Twenty other restaurants in Korea, from French, contemporary Korean, Japanese and more, were included in the list extending to 1,000, including Kwon Sook Soo, Jungsik and Ryunique.

Chef Ryu Tae-hwan of Ryunique, who practices “hybrid cuisine,” also received the special Nature prize for “working with the best local ingredients, prepared as natural as possible.” Ryu is the first Korean chef to earn the award.

La Liste was launched in 2015, sanctioned by France’s Foreign Ministry and Tourism Board. The gastronomic guide makes decisions based on online reviews, published reviews, consumer ratings and a survey of restaurant owners from around the world.