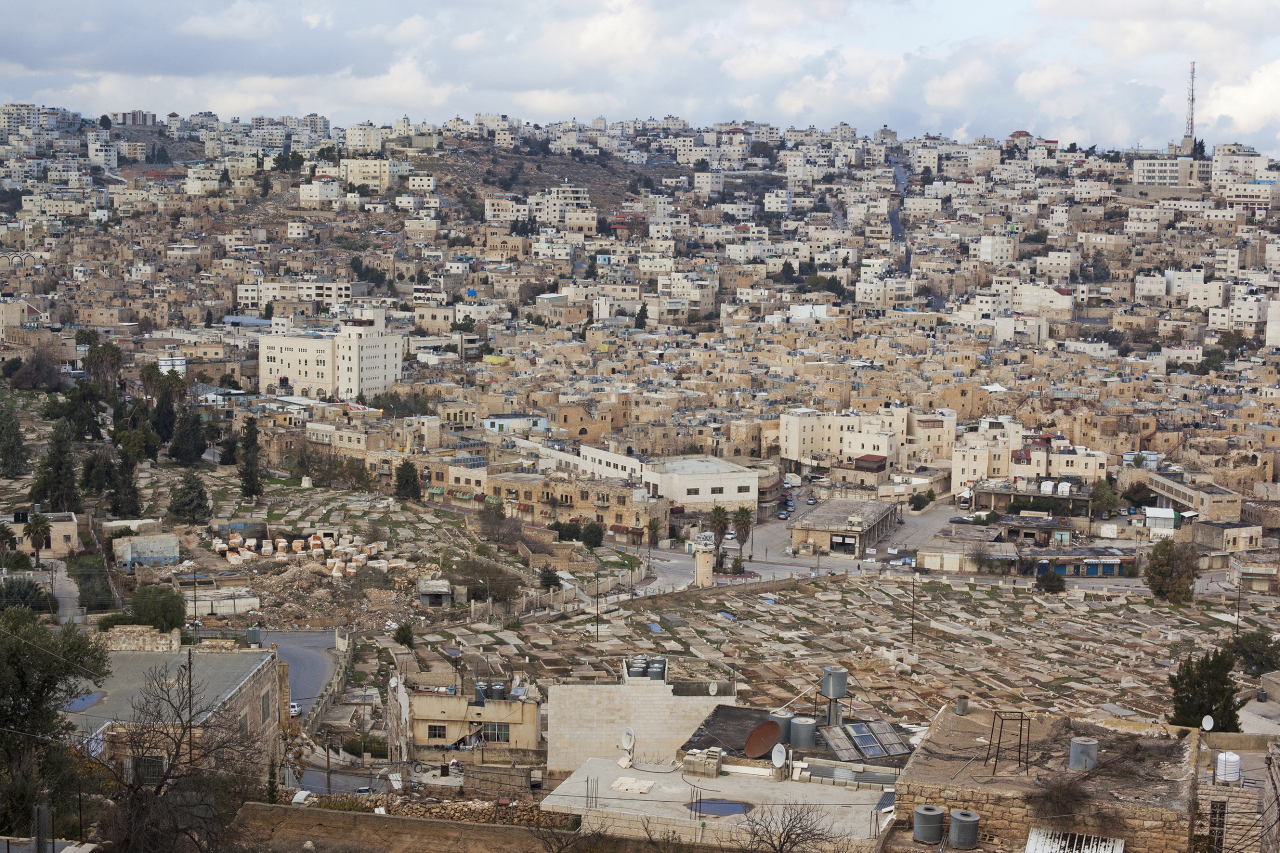 Ahlam Shibli’s photo from the “Occupation” series (2016-17) offers a view of a town in the city of al-Khalil, the Arabic name for Hebron. (SeMA)
Middle Eastern countries often face negative stereotypes among Koreans. But Seoul Museum of Art’s “Gohyang: Home” offers a closer look at nations in the region, beyond the stereotypes shaped and fueled by negative press.

The exhibition consists of works of art that address social, political and historical issues, such as the history of the Crusades, the ongoing conflict between Palestine and Israel, the war in Afghanistan, myths of Arab nations and the lives of ordinary people, particularly women.


Palestinian photographer Ahlam Shibli’s series “Occupation” (2016-17) shows scenes captured while she was staying in the city of al-Khalil, the Arabic name for Hebron. In her photos, Shibli tries to present the asymmetrical power dynamic between the Palestinian population and that of Israel.

The photos show details of the town as well as the livelihood of the Palestinian population and the territories occupied by the Israeli forces and Zionist settlers.

Many of them include the ways in which both Palestinians and Israelis use measures of occupation -- such as checkpoints, walls, fences, barriers, surveillance cameras, rules and orders -- to both protect themselves and segregate themselves from the other side.

Adel Abidin, a Baghdad-born artist, introduces a set of installations under the title of “Cleansing” (2018). His video features a scene where water cannons were shot at a line of people wearing clothes with dark stains -- based on “The Third of May, 1808,” Francisco Goya’s famous painting of a long trail of Spanish rebels suppressed by Napoleon’s army.

Along with the video, Abidin has hung a stained canvas, which the artist made during a performance. When filming the video, the artist made the stains drip onto the canvas placed on the floor, which absorbed the dirt that later created abstract figures. 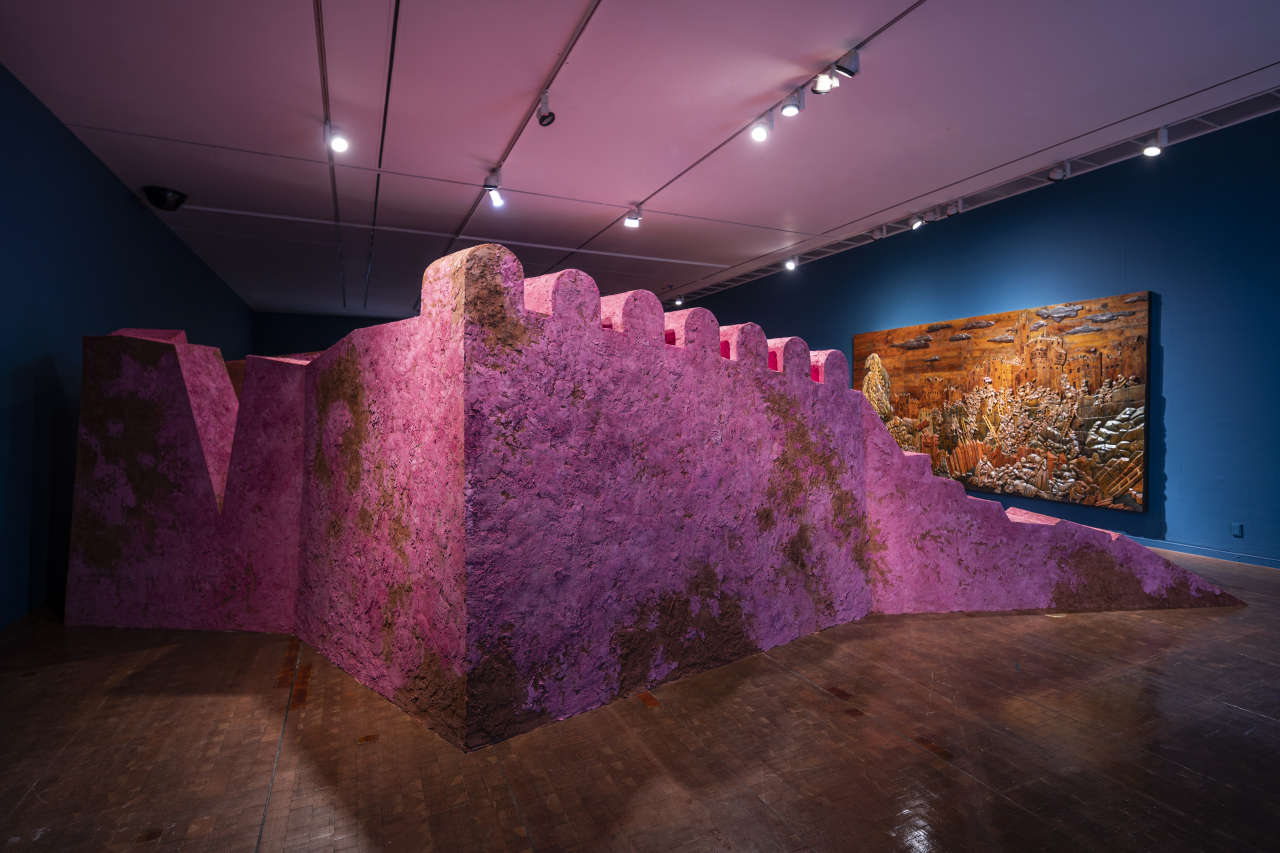 Wael Shawky’s “Cabaret Crusades: Wall #5” (2019) is shown at the Seoul Museum of Art’s exhibition “Gohyang: Home” (SeMA)
Wael Shawky introduces works that deal with the Crusades. “The Horror Show File” (2010) at SeMA is the first of Shawky’s marionette-film trilogy “Cabaret Crusades,” the artist’s historical examination of the Crusades, intermittent battles from the late 11th century to the 13th century between the Seljuk Turks and the Byzantine Empire over control of regions of the Near East.

In his films, Shawky exclusively uses Muslim sources instead of Western chronicles, with the aim of reconstructing history and challenging the historical narrative images reproduced by the West.

Also on view are works that offer glimpses into the lives of individuals.

Mounira Al Solh, a Lebanese-born artist, introduces an embroidery drawing series based on stories the artist began collecting in 2012, including the stories of Al Solh’s neighbors and their families who have left their homeland.

“So Much I Want to Say” (1983) by Mona Hatoum, a London-based Palestinian artist, depicts the experience of living as a citizen of what was then called the Third World in the West. The black-and-white video comprises a series of still images that change every eight seconds. The images are close-up shots of the artist’s contorted face, with her mouth aggressively covered by a man’s hand, which renders her unable to speak.

The exhibition also includes a photo series by Korean artist Che One-joon. Che’s photos capture mosques in Korea, with many of them sponsored by Korean construction firms that joined large-scale construction projects in the Middle East in the 1970-1980s.

“Gohyang: Home” at Seoul Museum of Art’s main branch in Seosomun-dong in central Seoul is the third edition of the museum’s exhibition series “Approaching the Non-West.” The inaugural exhibition of the series in 2015 focused on Africa, followed by an exhibition featuring art from Latin America in 2017.

The exhibition runs through March 8.