Tensions between the US and North Korea have heightened as the two sides exchanged threats and bellicose rhetoric of possible military actions if necessary, amid their stalled nuclear talks.

But they appear to have no intention to wind up their diplomacy at least for the next few weeks, experts said. 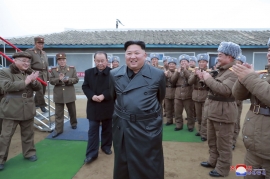 This undated file photo provided on Friday, Nov. 29, 2019, by the North Korean government, shows North Korean leader Kim Jong-un (center) surrounded by a military unit, reacts to what it claims as a test firing of its "super-large" multiple rocket launcher in North Korea. North Korea on Tuesday. (KCNA)

“The military option was never taken off the table. … I mean, the military exists to serve as a deterrent. It serves as a stabilizing force,” he said.

Hours earlier, Pyongyang said it could take corresponding military actions against Washington, in response to news reports that US President Donald Trump had hinted at the possible use of force against the regime if required.

“One thing I would like to make clear is that the use of armed forces is not the privilege of the US only,” Park Jong-chon, chief of the general staff of the Korean People’s Army, said in a statement.

Park said North Korean leader Kim Jong-un was displeased to hear Trump’s remarks. But he said the close relationship between Kim and Trump could prevent a confrontation.

“I think the only guarantee that deters physical conflict from flaring up between the DPRK and the US despite such a dangerous military stand-off is the close relations between the top leaders of the DPRK and the US,” Park said, referring to the North by its official name the Democratic People’s Republic of Korea.

With their working-level talks in Stockholm in October failing to yield an outcome, Pyongyang and Washington have not made any significant progress in their diplomacy to dismantle the North’s nuclear weapons program this year.

Experts here said North Korea has started preparing for a policy change in case its nuclear talks with the US fail to move forward without the concessions it wants, such as security guarantees and the lifting of sanctions imposed over the regime’s nuclear program.

Pyongyang has been urging Washington to offer a more flexible proposal by the end of December. Otherwise, it will opt for a “new way,” it has said.

With a few weeks remaining until the end of the year, the two sides are not likely to ruin the mood for dialogue, despite a slim chance of it taking place.

“They seem to be fighting a war of nerves to see if there’s any opportunity for dialogue before the year-end. Trump is not in a political situation where he can offer what North Korea wants. But closing the door of dialogue with the North will be a loss for his diplomatic performance,” said Koh Yu-hwan, a professor of North Korean studies at Dongguk University.

Once the deadline passes with no indications from Washington, the North Korean ruler will likely declare an end to diplomacy with Washington in his New Year’s speech, which usually covers his annual policy direction on diplomatic and domestic issues.

The policy shift may include strengthening cooperation with China and Russia, strengthening conventional military capabilities, such as short-range missiles, and pursuing a “self-reliant” economy to counter international sanctions.

“It is important for the US to issue a statement that indicates a change in its calculations, such as mentioning security guarantees, before North Korea announces the basic plans for the new year and the new path it will take,” said Hong Min, a research fellow at the Korea Institute for National Unification.