After slugging his way around South Korean baseball for years, MVP-winning outfielder Kim Jae-hwan now wants to see how he stacks up against big league pitching.

The Korea Baseball Organization announced Thursday it has asked Major League Baseball to post Kim for its 30 teams, making the 31-year-old slugger available for any interested clubs. 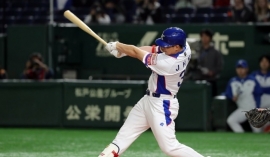 The Bears said Kim had told the team about his desire to play in MLB after the conclusion of the World Baseball Softball Confederation (WBSC) Premier12 tournament in November. The Bears said they met with Kim's agent a few times before deciding to grant the player's wish.

Under the posting system, any interested MLB team will be able to negotiate with Kim during a 30-day negotiating period, which will begin at 8 a.m. ET on the morning after MLB officially notifies its 30 clubs of Kim's availability. The window will close at 5 p.m. ET on the 30th day.

KBO players must put in seven full seasons or their equivalent to be posted. They must stay on the active roster for 145 days to qualify for a full season.

Kim, who made his KBO debut in 2008 but only became a full-time player in 2016, had fallen 47 days shy of his seventh full season at the end of the 2019 season. But he earned an additional 60 days of service time by representing South Korea at the World Baseball Softball Confederation Premier12 tournament last month.

"I don't know which teams will show interest in me or how I am going to be evaluated, but I am just thankful for this opportunity," Kim said in a statement released by the Bears. "Every baseball player dreams of reaching the majors. I'd like to thank the Bears for allowing me to take on this challenge."

Kim's decision comes as a surprise, given that he had a down year offensively in 2019.

Kim's Seoul-based agency, Sportizen, said the player will be represented in the US by Creative Artists Agency Sports.

Sportizen said CAA Sports first took interest in Kim in 2016, and the U.S. agency has compiled a scouting report on Kim to send to major league clubs. (Yonhap)