Top executives of van-hailing service Tada, which is owned by car-sharing company SoCar, argued in court on Monday that their operations are fully within the ambit of current laws.

They claimed during the first trial held at the Seoul Central District Court that the company has only upgraded an existing business model with a mobile application platform.

SoCar CEO Lee Jae-woong and CEO Park Jae-wook of its subsidiary and Tada operator VCNC attended the trial after they were indicted by prosecutors in October for running an “illegal” service. 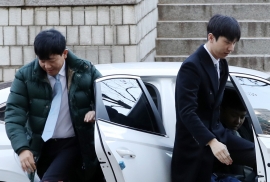 Their first court appearance garnered heavy media attention. Tada has been at the center of a heated debate between the need to foster innovative businesses and calls to protect taxi operators.

The main contention of Monday’s trial was whether Tada that uses 11-seat rental minivans -- Kia Motors’ Carnival -- could be considered as a taxi operator, or just a platform for rental cars with a chauffeur.

Based on the transportation law, prosecutors found Tada has been illegally operating taxi-like services without obtaining a license from the Transport Ministry, noting customers regard themselves as passengers.

But the company argued that Tada is simply a platform-based business that links rental cars with chauffeurs to customers, and it only “moved” the existing rental car service business model to a mobile application platform.

It claims that its service is legal as the law permits companies to provide chauffeurs for rental vehicles with 11 seats or more.

SoCar’s attorney also argued that sharing economy services such as those offered by Tada have brought significant social changes in South Korea, considering that some 18 million vehicles are idle at recidence parking lots or at work which is a waste of resources.

Launched in October last year, Tada has garnered an accumulated 1.25 million registered users on the app over a year, while the outsourced Tada drivers is around 9,000.

Since the service kicked off, Tada has been criticized by country’s taxi operators for being “illegal” and threatening their livelihood.

Following the heightened controversy, the National Assembly began reviewing the transportation law amendment proposed by Democratic Party Rep. Park Hong-geun. If passed, it would bolster approval criteria for services linking drivers with customers, challenging the operation of platforms like Tada.

Regarding the proposal, SoCar CEO Lee Jae-woong has written online that the proposal “does not only ban innovative mobility services such as Tada, but will also deepen the chasm in the current social conflict,” asking the parliament to hold a public hearing for communication between lawmakers and industries.