Ki Chan-soo, the commissioner for the Military Manpower Administration, vowed support for conscientious objectors, highlighting the MMA’s change of role with the upcoming introduction of an alternative form of service.

The chief of the military recruitment agency also asserted that a corruption-free draft system must be maintained, touching on the controversies surrounding the enlistment of K-pop stars and celebrities, such as Big Bang’s Seungri and the members of boy group BTS.

“Making sure the conscription service is maintained impartially, without privilege or violations of the law, is my strong conviction,” Ki said in an interview with The Korea Herald held at the MMA’s Seoul branch Nov. 22. 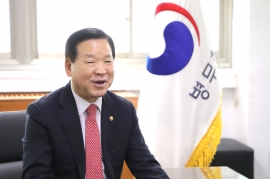 With the Korean War Armistice in place for almost seven decades, South Korea has established one of the strictest and most systematic conscription systems in the world, requiring all able-bodied men to serve in the military for about two years.

The Military Manpower Administration oversees the entire enlistment process before a conscript’s service begins -- from medical examinations of candidates to determining which conscripts will serve in which branch of the military.

While Ki noted the MMA’s role in catching draft dodgers, he also expressed hope that the relationship between the MMA and those who object to military service based on religious or other beliefs would improve.

“Because we are the enforcer in drafting soldiers, it is true we were not on good terms with conscientious objectors. MMA is in charge of transferring those who try to avoid the draft to the prosecution, after all,” Ki said.

Under the Military Service Act, those who refuse military service with no “justifiable” reason can face jail terms of up to three years. About 19,350 men have been sentenced to imprisonment under the act. For a long time, different perspectives on what constitutes a “justifiable reason” caused conflict between the MMA and conscientious objectors.

However, change is afloat with the recent passage in the National Assembly of a government proposal to accommodate those who object to military service on the basis of religious and other beliefs, following a Constitutional Court ruling in their favor last year.

“We will now make our best efforts to aid and protect the objectors so that they can serve their national duty accordingly,” Ki said.

Last month, an appeals court ruled in favor of Steve Yoo, a Korean American singer who has been banned from entering the country since 2002 after he was accused of giving up his Korean citizenship to evade military duty.

While Ki feels bad for Yoo when seeing him as an individual fighting a tenacious battle, he still believes that punishment in such cases should be harsh.

“In the end, he changed his nationality to evade the draft. Allowing him into the country would lower the morale of those who rightfully served their national duty,” Ki said.

As for Seungri -- a member of boy group Big Bang, who has been embroiled in a series of scandals and is currently being tried on charges related to alleged overseas gambling -- Ki said he is carefully watching the situation so that Seungri can enlist at the right time.

Because of the possibility that the 29-year-old idol might try to mitigate the scandal by joining the military, his enlistment has been delayed by the authority of the commissioner.

“The utmost priority is to make sure that Seungri is properly investigated on the charges against him. If the legal process does not end in time, we will take measures to draft him,” Ki said.

While the legal case could be transferred to a military court, Ki said it was important for the boy band member to fulfill his military training uninterrupted by the court process.

The MMA’s work to stop draft dodging is not limited to celebrities and public figures. In 2017, an ordinary conscript was found to have broken his fingers and toes repeatedly in hopes of failing the medical checkup and gaining exemption on health grounds. In March, a group of athletes were caught faking hearing impairment by using air horns and intentionally exposing themselves to high-pitched sounds.

To combat such practices, since 2012 the MMA has been operating a special police task force consisting of 38 officers. It had investigated about 900 people as of October this year, resulting in 398 conscription evaders being caught, according to the MMA.

When asked about the possibility of making military service voluntary, not mandatory, Ki said while that is the direction the country should take, it will be a long time before the necessary conditions are met.

The idea of changing the country over to a system of voluntary military service was recently raised by the ruling Democratic Party as a way to address manpower shortages in an aging society. President Moon Jae-in has said that while it will take a long time, the country will ultimately have to make this transition.

“While I agree that it is the direction the country ultimately should take in the future, the MMA has not reviewed introducing a voluntary military system,” Ki said.

For a system of voluntary military service to be implemented in Korea, three things would need to be in place, according to Ki -- a stable security environment, resources to pay the troops well, and a pool of people willing to serve that is sufficient to ensure military readiness.

“After all these conditions are met, then I believe a voluntary military system can be implemented gradually, by opening slots for those volunteers, while reducing the service term of conscripts at the same time.”