SEJONG -- South Korea has yet to see any positive signals of an economic revival although the government predicted it would bounce back in the second half of the year.

The financial woes of companies are continuing while the stock market is lackluster. In addition, another round of the US dollar’s strong position is aggravating the situation.

Korea saw its exports fall by 10.3 percent during the Jan. 1-Nov. 20 period, on year, according to the Korea Customs Service. The nation’s outbound shipments are estimated to have dropped for the 12th consecutive month as of end-November.

Korea was the world’s sixth-largest exporter as of 2018, closely competing with Japan (fifth), Hong Kong (seventh), France (eighth) and Italy (ninth). But the export downturn is projected to pull down its ranking and GDP growth. 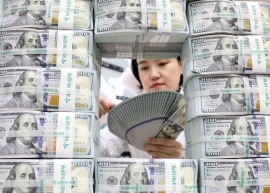 An employee at the headquarters of KEB Hana Bank in Seoul looks at US dollar notes to spot counterfeits. The greenback shows strong position against the Korean won this month. (Yonhap)

It is irrefutable that external factors -- such as growing global protectionism and tariff-related conflicts between the US and China -- have undermined exports of emerging countries.

In the first half of 2019, the government -- as a countermeasure -- offered semiconductor manufacturers and machinery businesses an extension of trade insurance, allowing them to enjoy the insurance ceiling up to twofold for a certain period.

But the sagging performance has continued so far despite the state-led benefits.

Experts are calling for the government and businesses to revise the paradigm fundamentally on a mid- and long-term basis.

A professor of Hankuk University of Foreign Studies was quoted by a news outlet as saying that “it is time to brace for the era of the ‘fourth industrial revolution.’ Items based on futuristic technologies and creativity will guarantee steady exports in the coming decades.”

In the capital market, the benchmark Kospi has recorded a dismal performance compared to 2018 and 2017.

Further, foreign investors have been on a selling spree aggravating the negative outlook. Foreigners net-sold local stocks worth 4.48 trillion won ($3.8 billion) over the past three months, which has pulled down the Kospi to stay under 2,100 points (2,087.96 as of Friday). 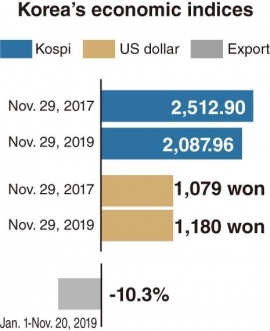 Gasoline prices in the local market posted 1,538.41 won per liter on Nov. 30 after a steady increase this month, though its prices stayed under 1,400 won per liter during the first quarter of this year.

Though the level is not quite high compared to early part of the 2010s, spiraling gasoline prices could not be favorable to most local businesses and households in terms of cost burden.

Further, many households are saddled with debt involving mortgages, which has pushed the ratio of household debt to net disposable income in the nation to approach the 200 percent mark.

The job market has also been in a prolonged slump with the number of unemployed people, aged 15-64, de facto surpassing 3 million.

These sagging indices are also in line with the nation’s low GDP growth, which could possibly stay under 2 percent in 2019 on-year. This falls short of policymakers’ 2.5 percent-target for potential growth rate in the coming years.