The Wyverns said they've met with Kim twice since he returned from pitching for South Korea at the World Baseball Softball Confederation  Premier12 on Monday. Because Kim was still under contract with the Wyverns, he needed the club's permission to explore big league opportunities. 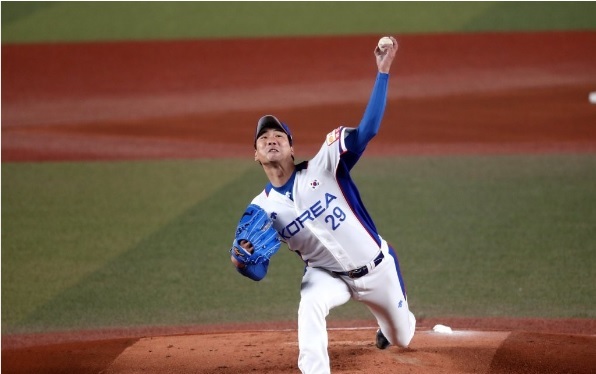 (Yonhap)
The Wyverns said they were worried that losing a pitcher of Kim's caliber would affect the team's performance next year but decided to grant Kim's wish after hearing different opinions from baseball figures and fans.

The Wyverns added they'll take formal steps with the KBO office to post Kim in the coming days.

Kim, who missed the entire 2017 season following Tommy John surgery, pitched 190 1/3 innings this year, the second-highest total of his career.

This will be Kim's second attempt at reaching MLB. He was also posted in 2014, and the San Diego Padres, with a posting fee of

$2 million, earned the exclusive negotiating rights with the pitcher for 30 days. But the two sides failed to reach a deal within that period, and Kim stayed put with the Wyverns.

The Wyverns' decision on Friday comes after the two sides engaged in some PR war.

Soon after the Wyverns, the 2018 Korean Series champions, were eliminated in the second round of the postseason, anonymous team officials were quoted as saying in some reports that Kim was too big a part of the Wyverns and he shouldn't consider leaving when the Wyverns are trying to win another championship.

Kim gave an interview with an online baseball writer on Nov. 8, immediately after the end of South Korea's group stage at the

Premier12 tournament, when he declared his desire to pitch in the big leagues. Kim also took some jabs at the front office for reneging on an earlier pledge to let him explore the major league market.

In a statement released by the team, Kim thanked the Wyverns for giving him the opportunity, saying, "It's been a lifelong dream of mine to pitch on a major league mound."

The Wyverns' general manager, Son Cha-hoon, said Kim is the first KBO player to be posted while still under contract, and he had his reservations about "setting a precedent." In the end, Son said he couldn't look past what Kim has done for the franchise.

"Kim Kwang-hyun is the source of pride for our ball club and our fans," Son said. "A lot of people said we should take into account his dedication to our team for the past 13 years."

Asked if he offered Kim any advice, Son said, "I told him that he should try to make Korean baseball fans proud. I hope he'll succeed."

The Wvyerns will ask the KBO on Saturday to formally post him, and they must submit a complete medical file on Kim, which will be made available to major league clubs. (Yonhap)