Whenever a young Basira Yeusuff wondered how much chili there was in her soup, her grandmother would always say, “Agak agak.”

Meaning “roughly” or “rough estimate” in Bahasa Malaysian, the phrase is used widely in Malaysian kitchens to explain seasoning amounts in home-cooking recipes, said Yeusuff, now a chef, using the tips of her fingers to explain how much “agak agak” could be.

It sums up the Malaysian food culture, and that’s why she chose it for the name of her first restaurant in Seoul in June. 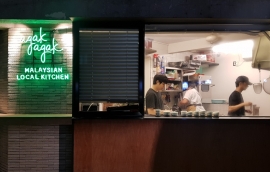 Agak Agak’s kitchen is visible from the outside of the eatery. (Choi Ji-won/The Korea Herald)

The menu is arranged to offer guests a chance to experience an assortment of representative Malaysian food, said Yeusuff.

One of the favorites at Agak Agak is nyonya laksa. Made with 11 ingredients, including six to seven spices, the warm noodle dish is a mix of sweet and spicy, with the coconut flavor adding just the right amount of sweetness to the chicken-shrimp-based broth. A bowl of laksa is priced at 13,000 won. 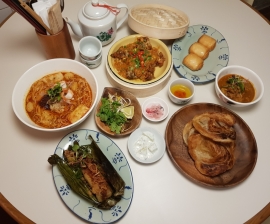 Roti canai served with chicken curry represents India’s influence on Malaysian food, Yeusuff explained. It is a pastry-like flatbread, crisp on the outside but delicately layered inside. You use your hands to eat roti canai and curry. It costs 15,000 won.

The restaurant recently added chili crab to its menu, a dish offering a taste of Chinese cuisine, according to Yeusuff.

The soft-shell crabs, mixed with chili and other Malaysian seasonings, come in bamboo baskets usually used to serve dumplings. Slightly salty and with strong flavors, the crab is accompanied with fried mantou buns. A plate of crab and three buns cost 23,000 won.

Side dishes of glutinous rice, pulut panggang and potato dumplings – karipap -- are also available at 5,500 won per serving.

Agak Agak is about 10 minutes’ walk from Hongik University Station on Subway Line No. 2 in Mapo-gu, Seoul.