Led by Tiger Sugar, Taiwanese drinks and desserts entice Korea, but will the craze last?

Myeong-dong is a symbolic battlefield in Korea’s franchise world. To be considered successful, one has to have a store or two there -- ideally right at the center of the busy tourist district. New store openings and closures are watched by many for signs of changes in food trends.

A visit to the area earlier this week revealed the increased presence of one particular Asian country among Myeong-dong’s cafes and dessert shops -- Taiwan. 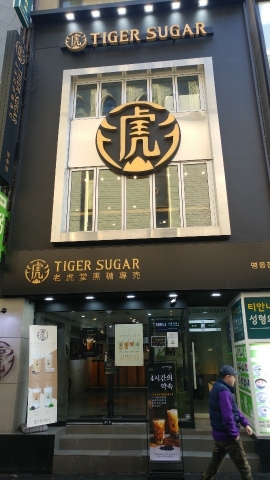 “Shake it up enough before drinking,” said the clerk who passed the signature boba drink over the counter. Two customers took selfies holding their drinks to show the iconic “tiger stripes” formed by thick brown sugar syrup.

Launched in 2017 in Taichung, Taiwan, the company is not only popular in Korea for what it calls its “drinkable desserts.” The Instagram-ready, syrup-streaked bubble teas are now served at nearly 40 locations across Asia and the US. 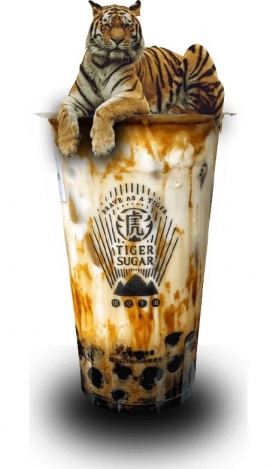 Tiger Sugar landed in Korea in March this year, with a shop in Seoul’s student-friendly Hongdae neighborhood. Boba enthusiasts lined up for hours, setting off the black sugar bubble tea craze that ruled the summer drink market.

But it seems the Korean boba market has plenty of competitors already.

Just a few steps from Tiger Sugar’s Myeong-dong store, two other stores offer authentic Taiwanese teas -- Jenjudan and Gong Cha. Black sugar syrup and tapioca pearls have a weighty presence on their menus. Gong Cha was started in Taiwan but is now controlled by Gong Cha Korea, which acquired a majority stake in its parent firm in 2017. 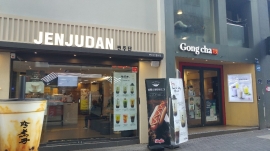 Branches of popular Taiwanese tea franchises Jenjudan and Gong Cha are located next to each other in Myeong-dong, Seoul. (Lee Sun-young/The Korea Herald)

Not far away, Heuk Hwa Dang and The Alley entice passersby with all the sweetness of Taiwanese desserts. They, too, have plenty of those black sugar bubble teas on the menu. The Alley came to Korea before Tiger Sugar, in September last year.

“The craze for black sugar bubble tea was driven largely by social media in Korea. … Now there are nearly 15 brands competing in the same type of drink,” Yuk Ju-hee, of the Korea Agro-Fisheries & Food Trade Corp., said in a recently released report.

The 70-year-old sandwich brand opened its first store in Seoul in March 2018 and has since experienced explosive growth, from the ground up.

Due to a surge in applications for branch openings, Hung Rui Chen Korea stopped taking new applications for months from September last year, only to resume in June. There are over 250 branches now in operation.

“Taiwanese sandwiches, made with simple ingredients such as ham, egg and cheese, have gained popularity for their affordable prices below 2,000 won ($1.70) apiece,” Yun said. 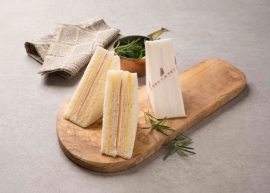 Market insiders attribute the interest in Taiwanese drinks and desserts, as well as its cuisine in general, to the rise of the country as a travel destination.

Slightly over 1 million Koreans traveled to Taiwan last year, according to data from the Korea Tourism Organization. Compared to five years ago, when the number stood at around 350,000, it represents an almost threefold increase.

Will the popularity of Taiwanese drinks and food continue?

The Korean food scene has had plenty of short-lived fads in the past, including for Taiwanese custard in 2016. Market insiders are keenly watching how the companies fare this winter.

“I have heard of Tiger Sugar and black sugar milk teas, of course. A Tiger Store opened near my workplace recently, so I tried it,” said Song Seon-mi, an office worker in Gwanghwamun. “I quite liked it, but don’t see myself drinking it often like coffee-based drinks. I am worried about the calories and sugar.”