Ko will tee off at the season-ending CME Group Tour Championship in Naples, Florida, on Thursday (local time) as the No. 1 female player in the world.

She has already clinched the LPGA Player of the Year award and also the Annika Major Award, given to the player with the best overall record at major tournaments each season. Ko won two of the five LPGA majors in 2019 and leads all players with four titles overall this season. 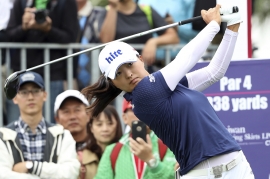 Ko is also leading the LPGA in money and scoring average. And if Ko holds on to win the money and scoring titles as well, Ko will become only the second player, after Ariya Jutanugarn in 2018, to sweep those four major awards while being No. 1 in the world.

In the scoring category, Ko is averaging 69.052 strokes per round, with No. 2 Kim Hyo-joo, also from South Korea, sitting at 69.361. Kim would have to outscore Ko by around 25 strokes at the Tour Championship, making the scoring title a virtual lock for Ko.

The money race is a different story. The Tour Championship will offer the largest purse in women's golf history, with $1.5 million going to the champion.

Depending on her placement at the Tour Championship, Ko could become the first LPGA golfer since Lorena Ochoa in 2007 to surpass $3 million in earnings in one season.

Led by Ko, South Korean golfers have once again reigned supreme on the tour in 2019, combining to win 14 out of 31 tournaments so far. A win by a Korean this week will tie the mark for most combined wins by players from the country in one season, set in 2015 and matched in 2017. (Yonhap)