Lyricist Michael Kunze and composer Sylvester Levay revealed their next production will be about the maestro Beethoven, set for its world premiere here in 2021.

They made the announcement about their new musical at a press event held Monday at The Shilla Seoul. The musical will have its world premiere here, as it is being created at the request of a Korean musical company. The interview was translated from German to Korean. 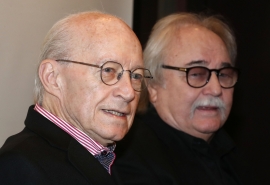 “The Beethoven we want to show you is not a hero. He is an average man in his 30s who finds it hard to fit into society,” Kunze said, explaining that the production will be set around the time when Beethoven lost his hearing.

After trying to kill himself, the musician meets the love of his life, who is addressed as “immortal beloved.” Her identity has not been revealed, but she is believed to be Viennese aristocrat Antonie Brentano.

“Beethoven overcomes his depressing life and realizes his value through love. He realizes that applause does not matter anymore. The most important thing for him is to listen to himself, which eventually leads to greater musical achievement,” the Prague-born lyricist said. 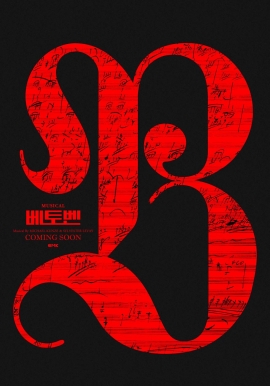 Musical “Beethoven” (working title) will have its world premiere in Korea in 2021. (EMK Musical Company)

At the press event, two numbers of the upcoming production were revealed. One of them was inspired by Beethoven’s “Ever Thine, Ever Mine, Ever Ours” love letter.

“This time, I am working on the music based on compositions written by Beethoven. The work process requires extra carefulness, as the original works are such masterpieces. I am trying to integrate his music with my musical world,” Levay said, adding he expects the musical to include 35 to 40 numbers.

Though 2020 marks the 250th anniversary of Beethoven’s birth, the producers say it will be hard for the musical to be staged next year, as there is not enough time.

“Moreover, this production is not about commemorating Beethoven, rather it is about the life that he had to live. It would not even have to be about Beethoven as long as other figures had a story worth telling,” Kunze said.

It is not the first time the duo has come up with a production based on a real person. They have conceived productions inspired by figures such as Mozart and Marie Antoinette.

“Historic figures have their own dramatic elements. In the end, what we want to deliver is the stories of this era -- the human ego, self-realization, freedom and the thirst for emancipation -- what everyone can empathize with. The historical figures are an example that the audience can relate to,” Kunze said.

The two artists first met in the pop music industry 40 years ago. “We have a chemistry that cannot be put into words. Our partnership is based on the desire to create, and friendship. Cooperation requires respect and honesty, as we have to exchange opinions sufficiently,” Levay said.

“Now that we have worked with each other for a long time, we do not need to speak to deliver our thoughts. It is not like there is a secret key for those 40 years, it is just about friendship, respect and trust,” the Hungary-born composer said.

The upcoming production “Beethoven” (working title) is being created and distributed by EMK Musical Company. It is set to be staged in 2021, though the exact schedule has not been revealed yet. It will be EMK Musical Company’s fourth original production, following “Mata Hari,” “The Man who Laughs” and “Excalibur.”