[ The Korea Herald – Send E-mail ]
Korean, Japanese defense ministers reconfirm differences on GSOMIA
By Jo He-rim
Publiished : Nov 17, 2019 - 15:31
Updated : Nov 17, 2019 - 18:22
The defense ministers of South Korea, Japan and the United States met Sunday to discuss their differences regarding the intelligence-sharing pact between Seoul and Tokyo, amid concerns that the ongoing row might weaken the trilateral security alliance.

Defense Minister Jeong Kyeong-doo and his Japanese counterpart, Taro Kono, held bilateral talks and met with their US counterpart in a separate trilateral meeting, both of which took place on the sidelines of the ASEAN Defense Ministers’ Meeting-Plus in Bangkok. 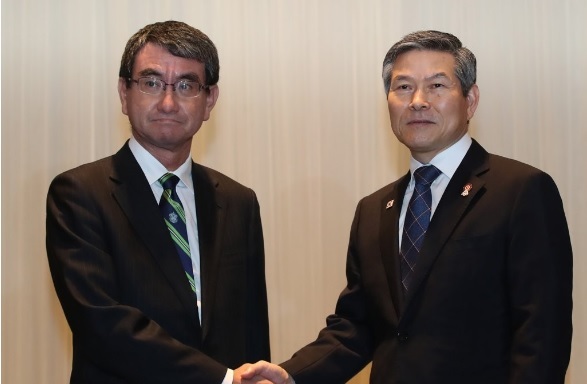 Regarding GSOMIA, “we rehashed our positions. What is important is more can be done (on this issue) on the diplomatic side, so I asked to support the diplomatic efforts,” Jeong told reporters after his meeting with Kono.

Viewing the move as retaliation, South Korea announced that it would not renew GSOMIA in August. While Tokyo wants to renew the agreement, Seoul has maintained it will only reconsider its decision if Japan normalizes trade.

However, Tokyo has reportedly decided to keep in place the export controls. Japan’s Yomiuri Simbun reported earlier Sunday that the Japanese government said the trade issue should be dealt with separately from GSOMIA and asked for the US to understanding its position.

GSOMIA will expire at midnight on Saturday, if the positions of the two sides do not change.

Speaking with Kono, Jeong also touched on the military dispute that broke out early this year, when Japan claimed a South Korean destroyer targeted its surveillance aircraft with a fire control radar.

Rejecting Japan’s claim, Jeong stressed that the source of the conflict stems from the Japanese aircraft flying dangerously low and close to the Korean destroyer.

Seoul’s ministry said both ministers agreed on the importance of trilateral security cooperation with the US for the resumption of denuclearization talks with North Korea.

After their bilateral talks, the two were joined by US Secretary of Defense Mark Esper for a trilateral meeting, where they also discussed GSOMIA and shared their assessments of the situation on the Korean Peninsula and in the region.

In his opening remarks at the trilateral talks, Esper highlighted that the ministers were to talk about the importance of sharing military information among the allies.

“It is important that we all work together closely to achieve our shared goal. This means looking beyond and overcoming bilateral issues that harm our efforts and play into the hands of Pyongyang and Beijing,” Esper said. “As such, we also talk about the importance of information sharing between allies.”

Esper had called for efforts from Seoul and Tokyo for the renewal of the intelligence-sharing agreement, in a joint press conference with Jeong just before.

“GSOMIA is very important to ensure timely and effective decision making in the air of crisis, in a time of crisis,” Esper said in the press briefing.

The US, which played a role in facilitating GSOMIA when it was signed in 2016, has been pressuring South Korea to renew the deal.

During the trilateral talks, the three ministers agreed on close cooperation to aid diplomatic efforts made by their governments for complete denuclearization and lasting peace on the Korean Peninsula, according to Seoul’s Defense Ministry.

They also shared evaluations of the launches of North Korea’s ballistic missiles and agreed on the importance of implementing international sanctions against the communist regime, the ministry said.