Struggling to innovate in a fast-changing, competitive market, South Korean banks have their eye on a new integrated financial service -- open banking.

The service lowers the threshold for bank customers by allowing them to use virtually all banking services of different banks via a single mobile application.

On Oct. 30, 10 major commercial banks here started offering the preliminary open banking app service for a 50-day pilot period. Eighteen banks and 138 fintech players had earlier applied for participation. The second-tier companies are slated to join Dec. 18, when the service officially kicks off.

Over 1.2 million bank customers joined and created nearly 1.8 million bank accounts within the first week of the service, as of Tuesday, according to the Financial Services Commission on Wednesday.

The service was used 12 million times in total as of Tuesday, and 1.7 million times daily on average. Of the total, it was used 8.9 million times to balance checks, 3 million for application program interface, and 220,000 for money withdrawals and transfers, data showed. 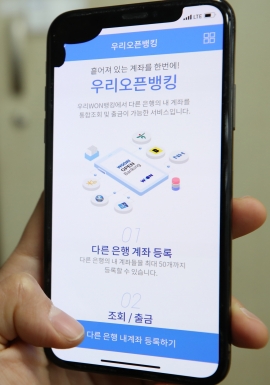 A dispute has arisen over an allegation that one of the participating banks -- Shinhan Bank -- broke an unofficial deal.

To prevent overheated competition, the banks had made a “gentlemen’s agreement” to hold their open banking app promotions until Oct. 30, according to industry insiders.

“The working-level officials in charge had a deal to hold off (open banking) account service until the official launch date but Shinhan broke this agreement,” said an official from one of the top-tier banks here, who wished to remain anonymous.

“As the deal was not binding, there is little that can be done. But still, Shinhan’s move was disappointing.”

Shinhan has denied the allegation. While admitting that it promoted the open banking app in advance, the bank said that the agreement with other banks never existed.

Even after the service kicked off, the open banking system turned out to have operational errors, with some of the apps failing to show account information.

“This is because banks have different methods and processes for account registration, not because of technological issues with the open banking system itself,” said an official of the FSC.

“We are currently going through a pilot service period, which is like running a beta version before the final version of a program is released. Necessary improvements will be made by the official launch date.”

The regulator, along with the Korea Financial Telecommunications and Clearings Institute, is working on connecting the open banking service to the “Account Info” service, which allows users to assess his or her account information at a glance. The given process will be completed first for six of the 10 pilot service banks on Monday, including Woori, KEB Hana and NH NongHyup Bank.

Customers have also raised complaints about limited functions in key banking services. For instance, the open banking apps of KEB Hana Bank and Woori Bank only allow money transfers from or to their own affiliated accounts.

On the sidelines of the open banking market, complaints are also mounting that the pilot service is heavily weighted against savings banks and internet-only banks.

“Of course, we are dissatisfied about being excluded by the Korea Financial Telecommunications and Clearings Institute from the preliminary service,” said an employee of one of the savings bank here, who asked to remain anonymous.

Calling for further deregulation in the sector, the official expressed hope to enter the open banking business from next year.

However, front-runners might gain an upper hand in the market by attracting customers to their apps in the early stage.

Responding to the concerns, financial authorities vowed to review the expansion of the open banking system to other financial institutions, including mutual finance, savings banks and the postal service.

“It was not our intention to alienate the nonbanking financial institutions,” said Song Hyun-do, director of the FSC’s Financial Innovation Bureau. “We’ll actively review expanding the service, so more banks can join the program.”