Police said Thursday they have placed a travel ban on Dorj Odbayar, the head of the Constitutional Court of Mongolia who stands accused of groping a Korean flight attendant and verbally abusing a Mongolian crew member during a flight from Ulaanbaatar to Incheon on Oct. 31. 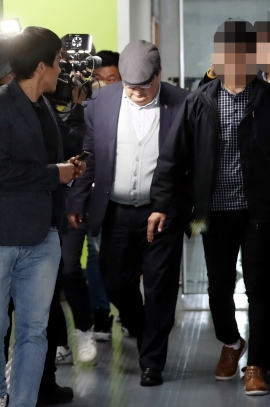 “We feel confident that Odbayar’s charges are clear and well founded and will hand him over to the prosecution on Friday or some time definitely before Nov. 15 when the 10-day travel ban expires,” an Incheon Metropolitan Policy Agency official told The Korea Herald.

On Wednesday, police arrested Odbayar when he arrived at Incheon Airport in the morning on a stop-over en route to Mongolia from Indonesia.

Odbayar denied most of the charges at Wednesday’s questioning.

Odbayar and a colleague, who has an arrest warrant issued against him for alleged sexual harassment of another Korean flight crewmate, were initially turned over to police on Oct. 31 by the flight crew. Upon their release, the colleague departed for Singapore. A day later, Odbayar flew to Indonesia to attend a scheduled conference.

Police released the two suspects on grounds of diplomatic immunity, but later changed position after the Foreign Ministry said they are not entitled to that privilege because they are not foreign diplomats stationed in Korea.

Police said they will apprehend Odbayar’s colleague upon his reentry to Korea. They added that they are coordinating with the Mongolian Embassy in Korea to facilitate his return.