Euro zone business activity grew more than initially thought last month but remained close to stagnation, according to a survey whose forward-looking
indicators suggest the existing growth might dissipate.

Wednesday‘s survey of businesses comes soon after the European Central Bank resumed its 2.6 trillion-euro bond-buying program to try and stimulate inflation and growth.The former head of the ECB, Mario Draghi, repeatedly called on euro zone countries to add fiscal support to stoke growth, saying because monetary policy could only do so much, and Wednesday’s readings suggest additional support may be needed.

His successor, Christine Lagarde, took over at the ECB last week. She will need to smooth over the differences between cash-rich countries such as Germany and the Netherlands, who opposed the decision to resume bond purchases, and the eurozone‘s struggling periphery.

IHS Markit’s final euro zone composite Purchasing Managers‘Index, considered a good gauge of economic health, rose to 50.6 from September’s 50.1, its lowest in more than six years.That exceeded a preliminary estimate of 50.2 but remained near the 50 mark separating growth from contraction. 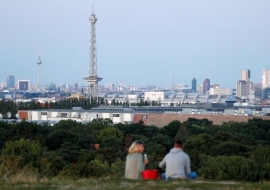 “Despite the upward revision, the index is consistent withthe economy barely growing at the start of Q4. We expect growthto slow across the board,” said Melanie Debono at Capital Economics.

Similar PMI readings occurred across much of the euro zone.Services in Germany, Europe‘s largest economy, barely grew last month. Growth in Spanish services was at its weakest in 13 months.

And French business activity picked up in October, although it remained lackluster. Italian services grew for a fifth month running and by more than expected, offsetting a long-running contraction in manufacturing.

The euro zone‘s manufacturing PMI, released on Monday, showed factory activity in the region contracted last month. Demand was again stifled by the US trade war with China and the persistent lack of clarity over Britain’s departure from the European Union.

There are fears the manufacturing slump is increasingly acting as a drag on services industry. A euro zone services PMI measuring new business was at 49.6, above September‘s 48.7 but the second consecutive month below 50.

Activity in the euro zone’s dominant services industryaccelerated but remained lacklustre. Its PMI nudged up to 52.2 from 51.6 in September.

Demonstrating the gloomy mood among purchasing managers, the business expectations index for services fell to 57.4 from 58.6.

It has been lower only once in five years, in August. (Reuters)