Despite the fact that it has been only three years since he launched his own label, designer Yoon Choon-ho is an established name in the fashion scene here.

Yoon, a graduate of Istituto Marangoni in Milan, is widely known for having starred in fashion-related TV shows “Project Runway Korea” and “New Sold Out.” The 37-year-old also headed fashion label Arche prior to YCH. 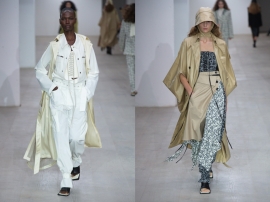 A model presents creations from the spring/summer 2020 women’s collection by Korean designer Yoon Choon-ho for his YCH label during the London Fashion Week in September. (Seoul Design Foundation) 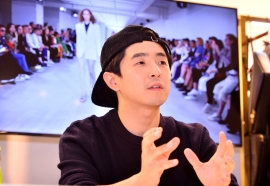 This September, his presence became more internationally established, following his debut at London Fashion Week through a joint project between the Seoul Design Foundation and British Fashion Council.

“The hard part (about the London show) was that I was a newbie there. But that was also the nice part, too. In Seoul, there are so many details to take care of, inviting celebrities, casting famous models, contacting buyers and the press, and more,” Yoon said in an interview with The Korea Herald earlier this month during the spring-summer 2020 Seoul Fashion Week, where YCH took part in the trade show segment. “But in London, I did not have to take care of any other details. I just focused on the collection.”

The latest collection of YCH was inspired by celebrated marksman Annie Oakley (1860-1926). Oakley was a star sharpshooter who later actively participated in social movements, such as raising awareness of women’s rights.

Yoon was fascinated by how the women’s rights activist wore a corset. That was the norm back then, but still, he was inspired by the irony. Some of the pieces in the collection took their motifs from the item.

“Oakley wore a corset because it was the right costume at the time,” he said. “In Korea, there is the ‘escape the corset’ movement and corset has become a symbol of oppression of women. But in the collection, a corset is simply interpreted as a period fashion item.” 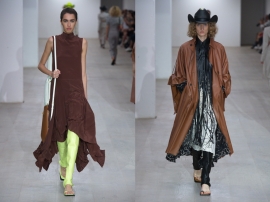 A model presents creations from the spring/summer 2020 women’s collection by Korean designer Yoon Choon-ho for his YCH label during the London Fashion Week in September. (Seoul Design Foundation)

“I have been blessed to be a part of Seoul Fashion Week. YCH earned its fame through the Seoul Collection,” he said.

“But physically, it was impossible to do a Seoul show this season. The clothes couldn’t arrive in time. And I do wonder, there are so many different ways to deliver our collection. Is Seoul Fashion Week the only answer? Doing the same show over and over in a limited space?”

Part of his concerns about Seoul Fashion Week comes from YCH’s sales structure. More than 80 percent of the brand’s sales are generated overseas, and are heavily reliant on the markets in Hong Kong, Singapore and Japan.

“I have to thank the Korean Wave. When Korean celebrities are spotted in YCH creations, overseas buyers give us feedback immediately,” he said.

Focusing more on overseas fashion scenes, Yoon hopes to go for something more upscale in the future. He has repeatedly revealed his passion for dresses.

“Personally, I am not into young fashion. My target range is not very young,” he said. “I hope women who wear YCH can mix up the pieces with pieces from other brands. YCH from head to toe can be too much. It’s all about the balance and the style.”