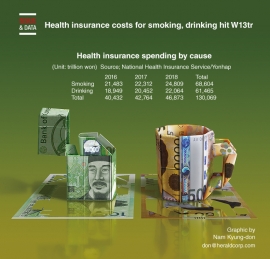 According to a report submitted to Rep. Jung Choun-sook by the National Health Insurance Service for the ongoing parliamentary audit, annual expenditures, including insurance coverage and costs paid by individuals, exceeded 4.6 trillion won last year, up 16 percent from 2016.

Costs to deal with treatment for smoking and drinking made up some 8 percent of the 58.7 trillion won used by the NHIS on insurance payments for the whole of 2018. (Yonhap)