Despite dominating this week’s headlines with their No. 1 debut in the US, K-pop supergroup SuperM has come under scrutiny over album sales in their home market that industry sources say have helped them secure the top spot.

The group, consisting of stars from multiple acts under S.M. Entertainment -- SHINee, EXO, NCT127 and WayV -- topped the Billboard album chart in the first week of October with 164,000 album sales and 4.9 million streams, which means nearly 95 percent of the hot debut came from pure album sales.

But multiple sources say a sizeable number of the albums were actually bought in Korea, possibly to take advantage of the members’ existing fandoms. 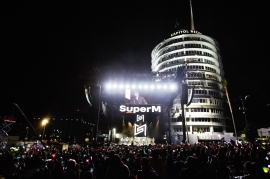 As the album was released in the US alone, the records were sold in Korea as import albums with a higher price tag and the Korean sales were counted towards the US album chart. Retailers also emphasized the fact possibly to better appeal to their fans.

“Many of the albums were sold in Korea. My company alone has shipped thousands of albums,” a local record importer told The Korea Herald on condition of anonymity. She declined to reveal the exact shipment volume.

On Yes24, one of the nation’s largest online record store, the eight member and group editions are ranked high in the monthly sales chart, with five in the top 50 chart.

The best-selling Baekhyun version is ranked 18th between AB6IX and X1 albums on the latest October chart based on September sales, including preorders. Because the retailer doesn’t reveal sales figures of individual albums, we turned to Gaon Music Chart, the nation’s standard record sales index. (Though even the Gaon chart doesn’t collect data on import albums.)

Based on Gaon sales in September, AB6IX’s “6IXSENSE,” which was released on Oct. 7 sold 31,324 copies, while X1’s debut album “Quantum Leap,” released on Aug. 27, sold 26,292 copies. These figures suggest that the Baekhyun edition is estimated to have sold some 30,000 copies during the same period.

According to Billboard, SuperM’s total album sales include 113,000 CDs and 51,000 digital downloads.

Both S.M. and its US partner Capitol Records were contacted for comment. An S.M. official said all the marketing strategy was set by Capitol without further elaborating.

An official of the Korea Music Content Association, the non-profit organization behind the Gaon chart, was also reluctant to comment in detail, but agreed it was an “unusual case” for a K-pop group to debut abroad without releasing a licensed album at home, with an aim to maximize album sales.

The group’s Twitter account didn’t shy away from eyeing the top spot, using words like “chart battle” and “assemble” in the days running up to the album’s release date.

Some fans responded to the enthusiasm with humor and skepticism.

“It doesn’t matter the spot we end up with, the album is amazing and we couldn’t feel prouder of you guys,” one fan tweeted.

Another fan wrote, “I don’t know but they’re doing way too much. The boys probably don’t even care this much.”