SEOGWIPO -- With the PGA Tour making its annual stop in South Korea's Jeju Island this week, hometown hero Im Sung-jae was picked by his countrymen Tuesday as the title favorite.

Im will be one of six full-time PGA Tour players from South Korea in the field at the CJ Cup @ Nine Bridges. The 72-hole, no-cut tournament with $9.75 million at stake starts Thursday at the Club at Nine Bridges.

The 21-year-old was voted by his peers as the 2018-2019 PGA Tour Rookie of the Year last month, becoming the first Asian-born player to be so honored. Though Im didn't have a victory, he was the only freshman to qualify for the Tour Championship, an exclusive season-ending event open only to the top 30 players in FedEx Cup points. The tireless workhorse entered a tour-best 35 tournaments and posted seven top 10s. 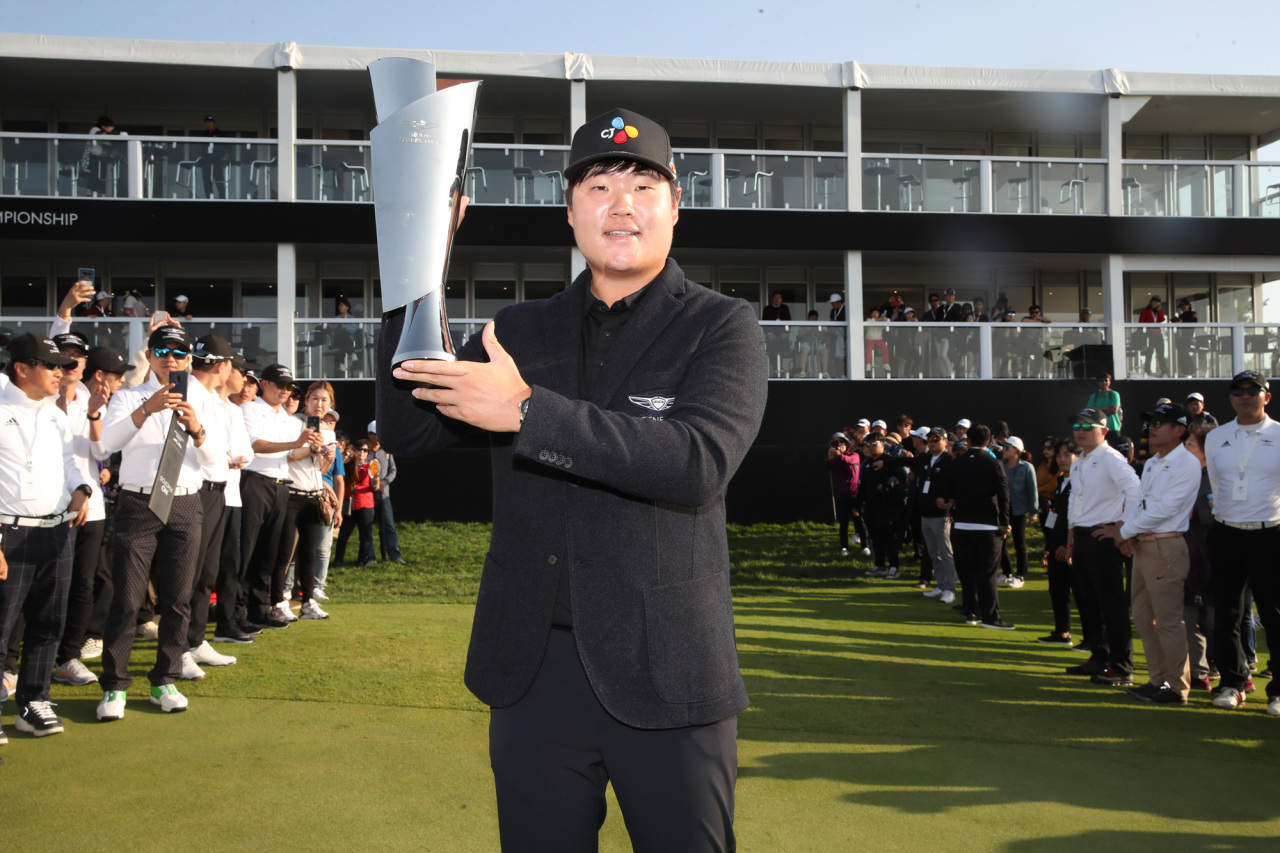 (Yonhap)
It's that kind of consistency that has fellow South Koreans on the tour expecting a breakthrough from Im, who grew up in Jeju.

Im is also coming off his first Korean Tour victory last weekend, which has only fueled the pre-CJ Cup hype.

"It'd be nice if one of us could win here," Im said sheepishly at a press conference Tuesday. "It's great to be back home. My goal this week is to finish in the top 10."

Five others on the podium flanking Im -- Kang Sung-hoon, Lee Kyoung-hoon, Kim Meen-whee, An Byeong-hun and Kim Si-woo -- all chose Im as their favorite to win the CJ Cup. The first two editions of the tournament have produced American champions: Justin Thomas in 2017 and Brooks Koepka last year.

Kang, another Jeju native who earned his first PGA Tour win in May this year, said it'd be great for him to pick up another W before the home crowd, but he won't put too much pressure on himself.

"If I can just relax playing before my family and treat this like any other tournament, then I think a good result will follow," Kang added.

While the rest of the bunch spoke about the challenges of navigating the wind here, An said good ball-striking will trump all inclement conditions, citing the quality play by Thomas and Koepka the past two years.

"The best ball strikers will win because their shots won't be affected by the wind as much," said An, the 2015 European Tour Rookie of the Year still searching for his first PGA Tour win.

"This is my third year in a row here, and I think the course is in the best shape it's been. Hopefully, one of us will win and help contribute even a small bit to the development of Korean golf. To have a Korean player sit here come Sunday (for the champion's press conference) will be something special."

Kim Si-woo, the 2017 winner of The Players Championship, the tour's flagship event, said his key will be to avoid mistakes around the greens.

"If you put the ball in certain spots, saving par will be a challenge," said Kim, who was the top South Korean at last year's CJ Cup when he tied for 23rd. "On some holes, you have to play it safe with your irons."

Kim Meen-whee, who led all homegrown players at the inaugural CJ Cup when he finished alone in fourth, had his own best-case scenario mapped out.

"Of everyone here, I've been struggling the most this year," Kim said. "So it'd be great if I win this week and the five other guys tie for second place." (Yonhap)