How about once a year?

The PGA Tour will make its lone annual stop this week on the resort island of Jeju, where the Club at Nine Bridges will host the CJ Cup @ Nine Bridges from Thursday to Sunday. The no-cut event will be the sixth tournament of the 2019-2020 season.

Koepka is the biggest name in the field of 78 at the $9.75 million tournament, as the current world No. 1 and the defending champion. Koepka sealed last year's title with an eagle on the 72nd hole and rose from No. 3 to No. 1 in the world rankings the following week. 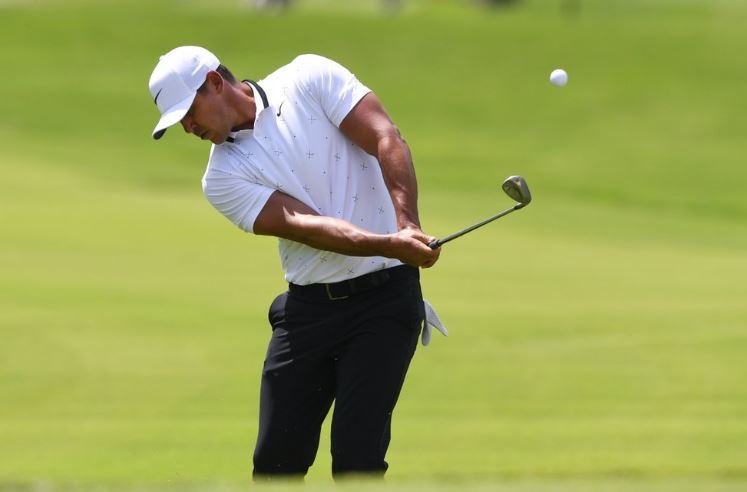 Brooks Koepka (AP)
Koepka pocketed $1.71 million last year, and the winner's share has been raised to $1,755,000 this year, making it the most lucrative regular tour event other than the four majors, three World Golf Championships tournaments and The Players Championship, the tour's flagship event called "the fifth major."

The CJ Cup title was the first of three wins for Koepka in the 2018-2019 season. He defended his PGA Championship title in May and then won the WGC-FedEx St. Jude Invitational in July, en route to capturing his first money title with nearly $9.7 million.

The 29-year-old has played just one event so far in the 2019-2020 season, missing the cut at the Shriners Hospitals for Children Open in the first week of October.

Thomas, the inaugural CJ Cup champion from 2017 and former No. 1, will be competing in Jeju for the third straight year. Spieth, another former No. 1 and a close friend of Thomas, will make his CJ Cup debut, as will Mickelson, a World Golf Hall of Famer with 44 PGA Tour wins and five majors.

Garcia, the 2017 Masters champion, will also showcase his talent before CJ Cup patrons for the first time. Woodland, the 2019 U.S. Open champion and runner-up to Koepka at last year's CJ Cup, will try to do one better this time around.

There will be plenty of homegrown talent for South Korean fans.

Headlining the local contingent will be Im Sung-jae, the reigning PGA Tour Rookie of the Year. He is fresh off an impressive win last weekend at the Genesis Championship on the Korean Tour, where he overcame a seven-stroke deficit for his first title on home soil. The 21-year-old will be chasing his first PGA Tour win on an island where he spent his childhood.

Choi Kyoung-ju, an eight-time PGA Tour winner widely known as KJ Choi outside Korea, will be in the field. He played at the inaugural CJ Cup two years ago but skipped last year's event. (Yonhap)