South Korea ranked 13th in terms of global competitiveness this year, backed by its leadership in information technology and strength to counter external shocks, a report showed Wednesday.

The country saw its competitiveness rising two notches from last year and by four from 2017, the Finance Ministry said, quoting the report from the World Economic Forum. 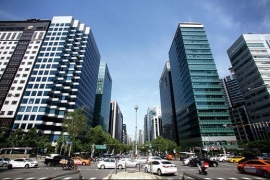 Among 141 countries studied by the WEF, Korea ranked tops in macroeconomic stability and dissemination of information and communications technology as measured by subscribers of mobile phones and fixed broadband internet services. The country’s infrastructure and capability for innovation came in at sixth while its health system ranked eighth. Rankings for market size, financial system, and institutions also were relatively high, placing the country at 14th, 18th and 26th, respectively.

In stark contrast to its strength in IT and the macroeconomy, Korea ranked nearly at the bottom in terms of the soundness of its labor market and labor-management relations.

In a category that assessed the level of labor-management cooperation, Korea ranked at No. 130. The cost for layoffs, which reflects the rigidity of the labor market, was also high, placing the country at 116th while facilitation of foreign workforce was measured at No. 100.

Korea also ranked No. 25 in vitality of businesses, three spots lower than last year, and No. 88 in public perception on ownership risks, falling 11 spots from last year.

By country, Singapore ranked top in the WEF report, followed by the US, Hong Kong, the Netherlands, Switzerland, Japan and Germany. Sweden, the UK and Denmark were also among the top 10.

Meanwhile, among the 36 members of the Organization for Economic Cooperation and Development, South Korea ranked 10th, and fifth in the East Asia and Pacific region.

Concluding the report, WEF noted that South Korea is a global leader in the ICT sector, but the country needs to improve entrepreneurship and flexibility in the labor market.

In response to the report, the government said it will push for labor market reform and increase injection of public funds to build a platform for innovative technologies.

The Finance Ministry also plans to form a private-public joint committee to devise ways to improve the country’s global competitiveness, it added.