A Seoul court on Wednesday refused to issue an arrest warrant for a younger brother of Justice Minister Cho Kuk in connection with a probe into corruption allegations surrounding Cho's family.

The Seoul Central District Court rejected the prosecution's request filed Friday, saying there is no need to arrest the suspect, given that the charges against him are disputable and enough evidence has already been collected.

The rejection is expected to deal a blow to the prosecution's investigation of the Cho family. 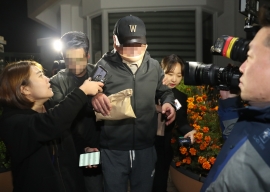 On Monday, Cho's brother requested a delay to a court hearing to determine whether to issue the warrant for him, citing back pain. But the prosecution executed a warrant to bring him to the court on the judgment that his health was no impediment.

He is the second member of the minister's family to be arrested in connection with the prosecution's widening probe into corruption allegations surrounding the family. The minister's nephew was arrested last month.

Cho's brother is alleged to have caused the Woongdong school foundation to incur financial losses by filing a fraudulent lawsuit against it over construction costs.

In 1996, his company participated in a construction project initiated by the foundation to expand a middle school.

In 2006 and 2007, he filed a lawsuit against the foundation seeking payment of 1.6 billion won ($1.5 million) in accrued construction costs and won the suit when the foundation gave up its legal defense.

Cho's family faces allegations that the foundation dropped its legal action against the brother in an attempt to hand over part of its assets to him.

Earlier in the day, prosecutors summoned the wife of the justice minister for the third time over allegations of forgery and her family's dubious investment in a private equity fund.

The prosecution questioned her for roughly 12 hours allowed to return home around 9 p.m., which is earlier than previous sessions and reflects recent reform measures being advocated by the justice ministry to better protect rights of people undergoing questioning.

In addition, the minister's wife was not exposed to the media, in keeping with the two previous times she was summoned.

Cho's wife, a professor surnamed Chung, was indicted for alleged forgery of a school award in early September. (Yonhap)