“South Korea is now our main economic partner in Asia. We are talking of increasing cooperation with Korean companies,” Polish Foreign Minister Jacek Czaputowicz told The Korea Herald in an exclusive interview in Seoul.

“There is also potential (to cooperate in) in nuclear energy. Of course, defense industries are working together on possible new areas of joint projects. Cybersecurity seems to be promising field for cooperation between both countries,” Czaputowicz added. 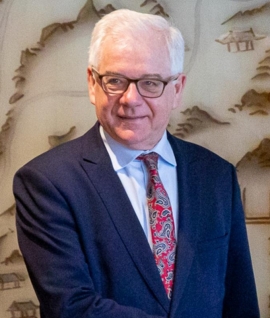 In the defense sector, South Korea and Poland are in the process of co-producing 120 units of self-propelled howitzers worth about $310 million.

Czaputowicz‘s visit to Seoul was arranged in time for the cybersecurity working group of the Warsaw Process, an initiative to address peace and security in the Middle East.

The conference was also attended by South Korea’s Foreign Minister Kang Kyung-hwa and Robert Strayer, deputy assistant secretary of the US Department of State’s cyber and international communications and information policy bureau.

“There is an attempt to influence internal relations and democratic systems in cybersecurity in Poland and the European Union,” Czaputowicz said.

“In the Middle East there are also cyberattacks which impact people. For example, on the facilities related to production of gas and oil.”

The two countries established diplomatic relations in Nov. 1989 and a strategic partnership in October 2013.

South Korean President Moon Jae-in met with Polish President Andrzej Duda on the sidelines at last month’s UN General Assembly meeting, where the two vowed to boost exchanges in diplomacy, energy, defense and cooperate for peace on the Korean Peninsula.