President Moon Jae-in on Tuesday urged for speeding up plans to strengthen the country’s industrial structure, and called for the swift passage of economy-related bills in the National Assembly. 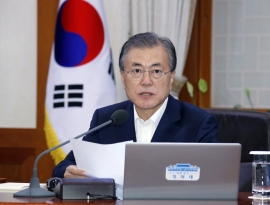 Speaking at a Cabinet meeting, Moon emphasized that related measures must be executed quickly, saying that while the government and the private sector have responded well to Japan’s recent export control measures, more needs to be done.

“If it becomes a turning point to fundamentally change our industrial structure by using this crisis as an opportunity, it will help strengthen our economic competitiveness,” Moon said.

Japan recently removed South Korea from its whitelist of preferred trading partners under its export control system, apparently in retaliation against a Korean Supreme Court ruling in favor of Koreans forced to work for Japanese firms during the Japanese occupation of the peninsula in the first half of the 20th century.

Moon went on to urge officials to accelerate the implementation of the planned changes, and requested closer communication with the National Assembly to facilitate the passage of pending bills.

He added that more support measures for businesses need to be rolled out.

At the meeting, the president also touched on plans designed to improve the country’s industrial competitiveness, as well as plans to increase cooperation between labor and management, and between conglomerates and SMEs.

Saying the impending implementation of reduced working hours in smaller companies is worrying the business community, Moon stressed the need for the quick passage of bills designed to reduce its impact.

The country’s working hours were reduced to a maximum of 52 hours per week for companies with 300 or more workers, and the rule will be expanded to include those with a workforce larger than 50 from next year.