With just days to go before SuperM’s debut on Friday, a creative director at Capitol Music Group, S.M. Entertainment’s US partner, says the K-pop supergroup’s first performance will be special and historic.

"At the launch, we have a very special and historic debut performance on Saturday at the Capitol Records Building in Los Angeles. And we are building on an incredible stage and (it) will be livestreamed around the world,” Nicole Frantz, Capitol’s creative chief, touted the event during a press conference on Tuesday.

She was visiting Seoul for Mu:con Seoul 2019, an annual three-day music festival. 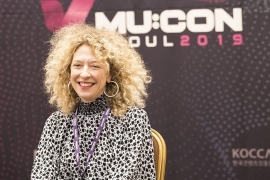 Nicole Frantz, creative director at Capitol Music Group, speaks about SuperM at a press conference in Seoul on Tuesday. (KOCCA)

Further describing the upcoming SuperM event, she said, “I think that would be very unique. We’ve only had a handful of performances in my 12 years at the tower. I’d say we’ve had three, so having this at this scale is a hugely exciting moment.”

Asked about concerns and skepticism about the group consisting of the members of popular acts under S.M., she hoped the group can bring different fandoms together.

Describing K-pop fans as “the most diverse pop audience ever,” she said, “It’s really remarkable and deeply impactful to see kids from every walk of life together enjoy K-pop.”

"My hope is that SuperM has the same impact,” she added.

As the seven-piece group, touted as the “Avengers of K-pop,” steps into the music scene later this week, Frantz says anticipation is high.

"At least in the West, there is this real anticipation for the project. The indications are in the US that people are really excited about it.” She also said the group will be exciting for newcomers who will experience many different artists for the very first time.

Though she now works with K-pop artists, she said her first encounter with the music dates a number of years back. In 2011, she became a fan of CL and Big Bang, the former of which is a fashion icon to her.

SuperM has been in the headlines since the announcement in August that S.M and Capitol had teamed up to create the new boy band with a US focus. It marked one of the biggest partnerships in K-pop in recent years.

The group consists of members from established acts, including Taemin of SHINee, Baekhyun and Kai of EXO, Taeyong and Mark of NCT, and Lucas and Ten, who are part of both NCT and its China-focused subunit WayV.

Ahead of its debut record release on Friday, the septet is scheduled to hold a press conference in Seoul on Wednesday before heading to the US for its debut performance on Saturday in Los Angeles.